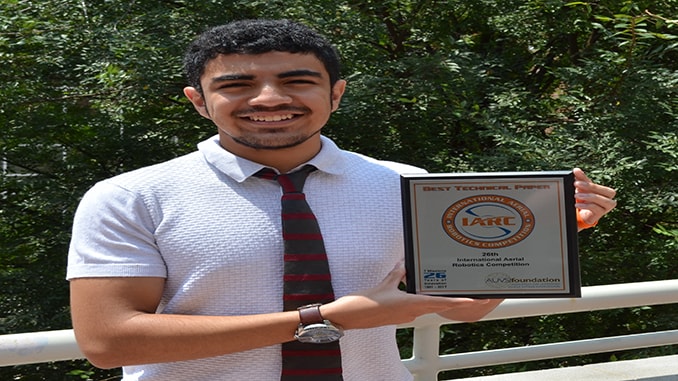 A team of North Dakota State University students competed, for the first time in the university’s and state’s history, in the International Aerial Robotics Competition and won an award recognizing their technical design. NDSU’s team was recognized for excellence in the design of the air vehicle, payload, operations and risk reduction.

The competition, which was first held in 1991 is now in its 27th year of operation.  According to the competition website, the competition is dedicated to “advancing the state of the art in autonomous aerial robotic behavior.”  The competition’s goal is to “tackle challenges that are currently impossible for any flying robots owned by government or industry.”  In some cases, challenges require multiple competition years to complete.  The previous mission ran from 2010 to 2013, with the current mission starting in 2014.

“Challenges like the International Aerial Robotics Competition provide an opportunity for students to learn skills that they don’t easily acquire in the classroom,” noted Computer Science Asst. Prof. Jeremy Straub, who serves as the team’s faculty advisor.  “This type of a competition is a nearly perfect analog for the workforce, where people from multiple technical backgrounds must work together to solve a technical challenge, usually under time pressure.  The recognition of the technical paper is a testament to the technical strength of the team and its members.”

The team was the sole recipient of the Best Technical Paper award at the competition.  This award recognizes the overall technical solution developed by the team as well as its presentation in the paper.  The paper was presented by NDSU Computer Science freshman Abdullah Almosalami at the competition.

“Before implementation comes design,” noted Almosalami.  “The IARC’s award for our paper is an indication of the strength of our technical solution and ability to complete the mission in the future.  The competition’s task is one that is said to be impossible within the aerial robotics industry.  This type of thing is exactly what progress looks like.  It is creating a better world and I want to be part of that.”

The team plans to continue working on its aerial vehicle to prepare to compete again at next year’s competition.

Macutex Signs Agreement With The Institute For Drone Technology