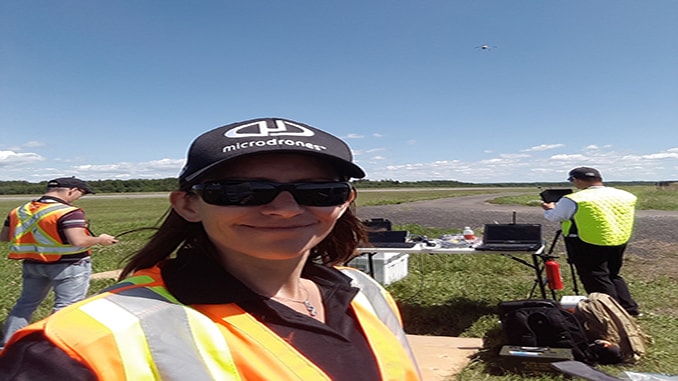 On July 13 and 14, Microdrones completed an exciting series of test flights that extended further than the operator could see – or, as it is referred to in the aviation industry, beyond the visual line of sight (BVLOS). These flights were completed with a standard configuration of RC, telemetry and batteries, meaning that the md4-1000 aircraft is ready for BVLOS, as sold today.

BVLOS flights are a significant achievement in the commercial drone industry. Legal only with special permission, few companies have performed such flights.

Leaders who fly BVLOS make an important contribution to advancing the industry by demonstrating the capabilities of these systems to perform tasks that require distance, such as delivery, corridor mapping, and infrastructure inspection.

The BVLOS Tests – and the Results

The first set of tests Microdrones completed were long-range tests over the Alma airport runway. The longest of these was three kilometers back and forth. The md4-1000 aircraft made the six-kilometer trip with battery life to spare.

The second set of tests consisted of altitude flight testing in which the drone climbed to a height of 850 meters.

“We are very excited about the results,” said Jocelyne Bois, Microdrones’ Flight Operations Manager. “All flights went well and we easily exceeded our intended flight lengths. Our goal was to test the remote control, telemetry and battery endurance for those distances. Both performed beautifully.”

Only seven other companies worldwide have this distinction.

Microdrones is a BVLOS Veteran

Microdrones is hardly a newcomer to BVLOS flying. A Microdrones UAV, flying with a custom configuration, flew more than 12-kilometers to cross the North Sea. This flight was repeated 32 times, with 2 different md4-1000 aircraft, establishing it as a viable option for delivering urgent medicines and other badly needed supplies in emergency situations.

Macutex Signs Agreement With The Institute For Drone Technology