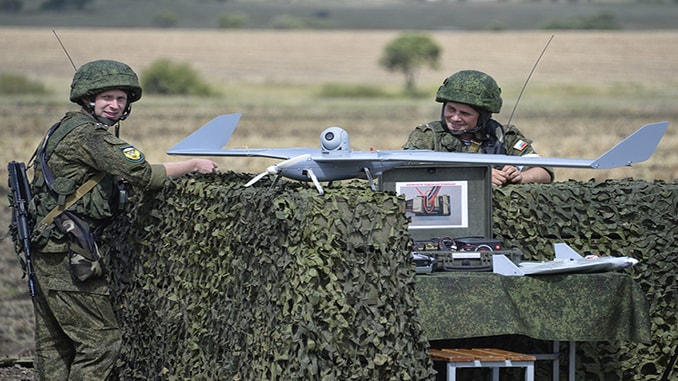 Russia’s Kronshtadt Group has developed a laser system for determining the coordinates of unmanned aerial vehicles (UAVs) designed to give the exact data on a drone’s position at its approach phase. The technology was presented at the MAKS-2017 international airshow.

“The system is designed to automatically scan the airspace sector in the direction of the drone’s expected approach, automatically capture the UAV and carry out its angle tracking as it moves along its landing glide path and runs on the runway,” the accompanying materials say.

According to the system’s developers, the slant range of the drone’s capture and tracking is from 50 to 8,000 meters.

The laser-based coordinate determining system measures a drone’s dynamic position, providing for the possibility of its safe takeoff and landing in the absence of satellite navigation data.

The system is characterized by the increased stealth and noise resistance capabilities through the use of passive detection methods.

Editor-in-chief of Bespilotnaya Aviatsia (Unmanned Aviation) magazine Denis Fedutinov noted that the development and introduction of these systems helped achieve a low accident rate at the stage of a drone’s landing.

“A considerable share of accidents at the stage of drones’ landing in the manual mode occurs due to the ‘human factor’ when an operator wrongly estimates the drone’s position in the airspace. In order to exclude such instances, this phase is maximally automatized in modern UAVs of quite a heavy class,” Fedutinov told TASS.

The expert cited as an example the Israeli drones Searcher MkII assembled in Russia under the name of Forpost and outfitted with the OPATS system developed by the Swiss company RUAG.

“Political circumstances entailing obvious risks have formulated the task to develop a similar domestic system, which has been done in this case by Kronshtadt Group,” the expert said.