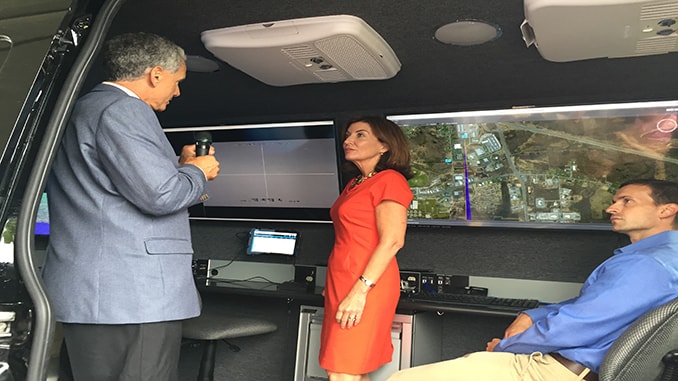 Governor Andrew M. Cuomo today announced that Gryphon Sensors, a SRC Inc. company based in Central New York, has developed a state-of-the-art mobile Unmanned Traffic Management system called Mobile Skylight. The development builds on the state’s investments in the region’s emerging Unmanned Aerial Systems industry. Last August, the Governor announced a $5 million commitment through the Upstate Revitalization Initiative to support the UAS industry in Central New York, bolstering ongoing efforts to create a regional hub for UAS innovation and manufacturing. At an UTM convention in Syracuse last November, the Governor announced an additional $30 million investment that is being utilized to develop a 50-mile flight traffic management system between Syracuse and Griffiss International Airport in Rome.

“By investing in the state-of-the-art technologies of tomorrow, we ensure that New York remains at the forefront of innovation and high-tech industry across the country,” Governor Cuomo said. “With this new development, this region further secures its role as a national leader in drone technology, helping to spur job creation and economic activity – helping Central New York continue to rise for generations to come.”

Mobile Skylight sets a new standard in drone security and UAS traffic management. Featuring an array of self-contained multispectral sensors, the system provides accurate three dimensional detection of low-flying, small UAS at a distance of out to 10 kilometers. Contained in a sleek, rugged van, Mobile Skylight is a complete mobile command center featuring 4×4 off-road capability and can be taken anywhere without a commercial driver’s license. It’s designed for rapid deployment of a wide range of applications including stadium, special event security, first responder and search and rescue operations, infrastructure and utility inspection.

“Today’s unveiling of Gryphon Sensors’ first-in-the-nation unmanned aircraft management system underscores that Central New York is positioned to become a world leader in the UTM field,” said Lieutenant Governor Kathy Hochul, who spoke at today’s announcement. “With the creation of the drone corridor, the Genius NY competition, and the alignment of our business and academic institutions though the Central New York Rising Upstate Revitalization Initiative, we are building a hi-tech industry cluster and preparing the local workforce needed for its sustained growth into the future.”

The states’ $35 million investment is already growing the UAS industry through the strategies outlined in the Central NY Rising plan. Supporting this effort is the strong regional presence of aerospace firms, such as Saab, Lockheed Martin and SRC, and regional assets, such as the NUAIR Alliance, which operates a FAA-designated Unmanned Aerial Systems test site.

Educational institutions, such as Syracuse University and Mohawk Valley Community College, have also aligned training curriculum and research efforts around the growing needs of this sector. New York State is also sponsoring Round Two of GENIUS NY program; one of the largest business accelerator programs in the world which caters to business proposals in the categories of Unmanned Systems and Data to Decisions Applications bringing together some of the most promising startups to help shape the future of Central New York.

Senator Joseph A. Griffo said, “Today we continue to witness the economic impact that our state’s significant investments are having on our region, with high-tech industries stepping up to take advantage of the great potential for growth we have to offer in the Mohawk Valley. The more we capitalize on all of the exceptional assets that exist across Central New York, the more momentum we will gain to attract additional business partnerships that will create jobs, strengthen our local economies and further position us to make the most of the future.”

Assemblyman Al Stirpe said, “Working together and pulling in one direction, our region is fast becoming an important hub for the burgeoning unmanned aerial systems industry. Today’s exciting announcement is a great example of the many innovations happening here at Gryphon Sensors and across Central New York.”

Assemblyman Anthony Brindisi said, “Central New York and The Mohawk Valley have been centers of innovation for two centuries, and this region is again leading the way in manufacturing, research and development in the Unmanned Aerial Systems Industry. Because of the collaboration that is taking place here, and the investments made in the Griffiss International Airport, this industry is poised to fly high. The work that is being done here will lead to new, good-paying jobs and spin off businesses, with the participation of private industry, and some of our region’s excellent colleges and universities.”

Onondaga County Executive Joanie Mahoney said, “The commitment from Governor Cuomo and New York State is very important for the region. This growing drone industry is central to the CNY Rising plan which is working to grow the regional economy. I want to thank the Governor for doing what he promised and supporting strategies and initiatives developed here at the local level. Companies like Gryphon Sensors are helping to lead the way in establishing Central New York as the global hub of the Unmanned Aerial Systems industry.”

Oneida County Executive Anthony Picente Jr. said, “The Mobile Skylight system is another major step in the development of a corridor between Griffiss International Airport and Syracuse that is cementing the Mohawk Valley and Central New York as a regional hub for UAS innovation and manufacturing. I want to thank Governor Cuomo for this investment which further solidifies our Griffiss UAS test site as a unique national asset that sets our area apart.”

Central New York Regional Economic Development Council Co-Chairs Robert Simpson, President and CEO of CenterState and Dr. Danielle Laraque-Arena, President of Upstate University Medical Center said, “The launch of Gryphon’s mobile UTM system is a significant step in making the region home to the nation’s largest and most comprehensive 50-mile operational UTM corridor, enabling the next evolution of unmanned civil aviation. It’s also a showcase of our region’s assets, resources and capabilities – with a wealth of existing private sector expertise and the potential to attract new businesses, jobs, and grow this industry even further.”

Larry Brinker, interim president and CEO, NUAIR Alliance said, “We are proud to be part of the comprehensive strategy to strengthen Central New York and the Mohawk Valley’s global leadership position in the unmanned systems sector, and partner on advancing the systems and technologies that are critical to integrating UAS into the nation’s commercial airspace. With these expanding capabilities, the region is well positioned to capture a piece of the $140 billion global marketplace for this sector.”

For more information about the Mobile Skylight unit click here.