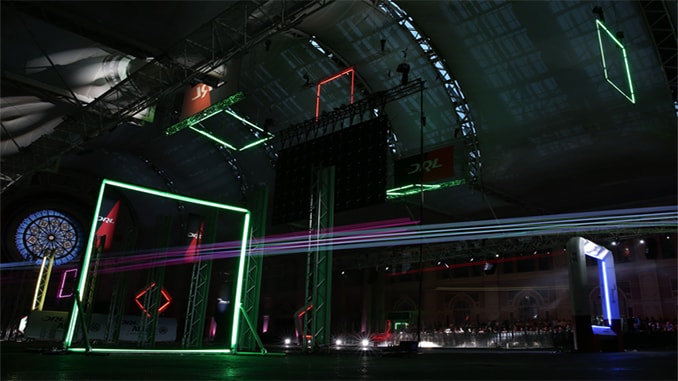 The Drone Racing League (DRL), the global leader in professional drone racing, announced the premiere of the 2017 Allianz Circuit Season Finale, the Drone Racing World Championship, airing on ESPN this Friday, July 28 at 9 PM EST. Following an epic playoff race in Munich and an electrifying 2017 season, the world’s eight best drone pilots face-off at the DRL Allianz World Championship at the iconic Alexandra Palace in London, fighting to be crowned the World’s Greatest Drone Pilot.

“The 2017 DRL Allianz season has been incredible, featuring the world’s best drone pilots and the craziest, three dimensional race courses ever created,” said DRL Founder and CEO Nicholas Horbaczewski, “The talent of the pilots and competition continues to improve every race, and we can’t wait to deliver the London Championship to our growing fan base around the world.”

At the 2017 season finale DRL pilots face a daunting course at the iconic Alexandra Palace, hitting speeds of more than 80 MPH and navigating razor sharp turns and the first ever FPV Power Loop, a series of light gates stretching across 180 degrees and forcing the drones into an inverted dive at full speed.

Also debuting at the Drone Racing World Championship is the custom Grand Tour Finish Gate, inspired by the iconic green tent on the global hit Amazon Original Series The Grand Tour with Jeremy Clarkson, Richard Hammond and James May. The finish gate will capture the drones as they sprint across the finish line at full speed, bringing the action and thrill of the chase to fans around the world.

The Drone Racing League launched in January 2016 as the only global professional drone racing organization, hosting five professional races in its inaugural season. DRL’s ’16 season reached more than 75 million fans around the world, including more than 33 million broadcast viewers and more than 45 million views of its digital content.