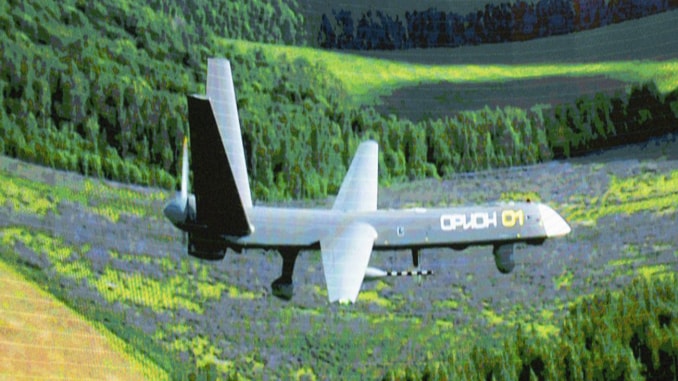 Kronstadt Technologies unveiled at the MAKS air show on 19 July a flying prototype and a vision to enter the export market within three years with the medium-altitude, long-endurance (MALE) Orion-E unmanned air system (UAS).

The 1t-class Orion surveillance system – roughly equivalent to the size of the General Atomics Aeronautical Systems RQ-1 Predator and AVIC Wing Loong Block 1 — was also revealed as the first piece of a wider strategy by the St. Petersburg-based Kronstadt.

The Russian company — formed in aftermath of the Transas bankruptcy – also plans to offer a portfolio of low-alititude, long-endurance UAVs and a 7t-class UAV with vertical take-off and landing capability within a decade, says Nikolai Dolzhenkov, chief executive of Krondstadt’s UAV division.

The long-awaited unveiling of the Orion-E continues the Russian aerospace industry’s torturous path to relevance in the global UAV market. Although widely successful in marketing manned combat aircraft abroad, the Russian military has yet to acknowledge a MALE UAV capability within its ranks, and its industry – despite numerous false starts – has yet to deliver a product in that category.

Kronstadt believes the Orion-E is ready to defy the industry’s track record. Unlike previous unveilings at MAKS of large UAV concepts that were never seen again, the Orion-E has actually flown. Kronstadt displayed a video of the 16m (52.5ft) wingspan in flight, but declined to provide other details including the timing of the first flight.

Somewhat cryptically, Dolzhenkov described the Orion-E as a “mainly technologies” and a “platform for further development”. Though flying as a prototype, the composite aircraft is “far from realization right now”, he says.

The aircraft features a slender, 8m-long fuselage, high-aspect ratio wings and a V-tail. The aircraft is “intended” to carry a payload of 60kg (132lb), but can lift a maximum load of 200kg, according to a production information card.

Kronstadt will work with Rosonboronexport to market the Orion-E abroad, with specific interest in sales to Southeast Asia, Latin America and Africa.