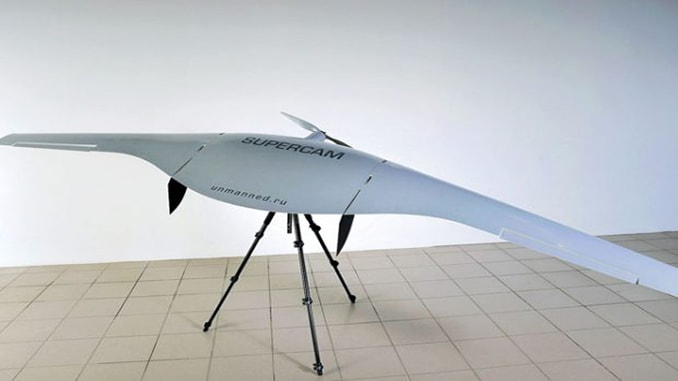 Izhevsk-based Unmanned Systems is using this year’s MAKS show to present a mock-up of its new development, the Supercam S450 unmanned aerial vehicle (UAV). This upgraded version of the Supercam S350 baseline has its accumulator-powered endurance extended to eight hours and can carry four kilograms of payload. The developer says the UAV has a maximum airspeed of 120 km/h and a maximum range of 560 km. The radio link has a maximum operational radius of 110 km, and the video channel range is up to 80 km.

The UAV is fitted with a wing detachment mechanism for rough landing situations. The detachable wing simplifies transportation and repairs.

An Unmanned Systems representative told Russian Aviation Insider that the aircraft has successfully passed the flight tests and is ready for series production, which is scheduled to start in late 2017. The price tag will depend on the configuration and is negotiable. The Supercam S450 is intended for real-time airborne video surveillance day and night.

As part of its exposition at MAKS 2017, Unmanned Systems is also demonstrating a target acquisition and tracking module.

Mounted on a UAV, the module can acquire and track a target selected by the operator. It supports digital image stabilization; keeps the UAV in place based on the video imagery, including in situations when satellite-based navigation is unavailable; and also provides automatic target tracking and autonomous camera movement control based on the video picture.