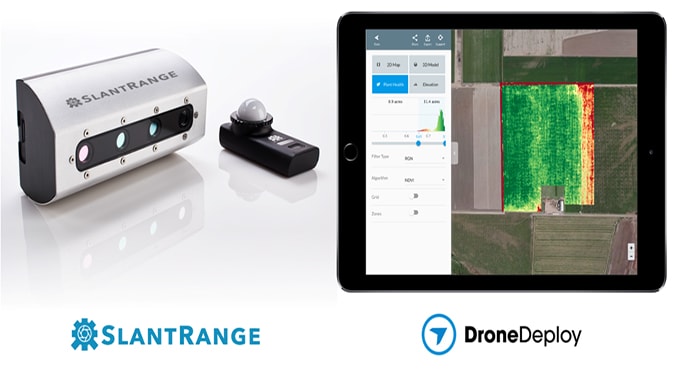 In addition, DroneDeploy released improvements to its proprietary map processing algorithms– just in time to address some of the most common challenges growers face when mapping late-stage crops.

“Until now, stitching late stage crops has remained an unsolved problem in image processing,” said Nick Pilkington, CTO and co-founder of DroneDeploy. “We’re excited to deliver a solution to our customers that lets them create high quality maps at all stages of crop growth.”

Growers looking to use drones have many different hardware options to choose from — and now they have more freedom than ever to use the camera or sensor of their choice with DroneDeploy. While most growers begin with the visible spectrum cameras that come standard on drones like the DJI Phantom 4 Pro, many turn to sensors designed specifically for agriculture in order to perform more accurate, scientific analysis of plant health.

Now DroneDeploy customers can fly and capture imagery and process and interpret maps using sensors from Sentera and SLANTRANGE, all compatible with the latest DJI drones. To create a DroneDeploy map with these sensors, users should install the free SLANTRANGE or Sentera application within DroneDeploy, fly using the DroneDeploy mobile app, and upload imagery to DroneDeploy for processing. Once the map is complete, users will be able to view, analyze and share plant health data specific to the sensor used, providing an end-to-end solution all within the DroneDeploy software suite.

“Sentera is excited to bring our most popular and most affordable high-precision NDVI sensor to the DroneDeploy platform. We’re committed to supporting our customers’ preferred workflows and enabling an open and accessible set of downstream analytics based on genuine NDVI and other index products,” said Eric Taipale, Sentera’s CEO. “Our partnership with DroneDeploy does just that, providing DroneDeploy users a seamless integration with Sentera’s high-quality sensors going forward.” 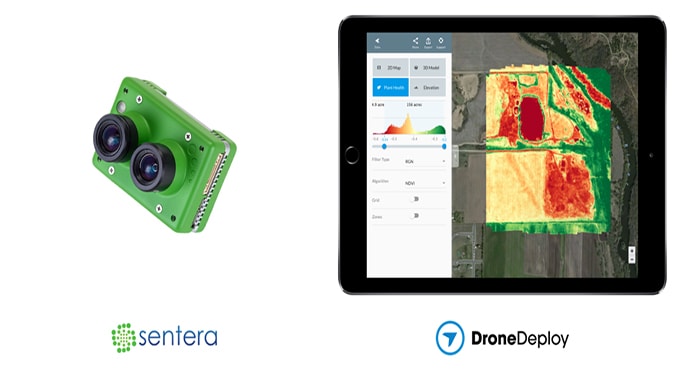 “SLANTRANGE is committed to promoting an open ecosystem that allows customers to collect and process their data using a combination of tools that work best for their business,” said Matthew Barre, Director of Strategic Development at SLANTRANGE. “This partnership gives DroneDeploy customers access to the accuracy and specificity of SLANTRANGE’s true multi-spectral imagery.”

Late-stage crops pose a challenge for mapping software, which relies upon identifying unique points that appear in several different images to “stitch” together a map. Growers that have used drones for mapping in seasons past are all too familiar with what can result — maps with holes, warped areas, or even maps that fail to process at all. “It’s an issue we’ve been having in the last couple of years, especially in corn crops,” said Robbie Weathers, an agronomist in South Carolina. “Trying to stitch together a corn field late in the season is like trying to stitch the ocean — it’s really hard.” After analyzing data from over 10 million acres mapped and hearing feedback from hundreds of users, DroneDeploy has made significant improvements to a proprietary processing algorithm to address the specific challenges of late-stage field maps. Extensive testing demonstrated that incomplete maps processed using the previous stitching algorithm resulted in complete maps 90-95% of the time when reprocessed using the improved algorithm.

One of the reprocessed maps belonged to Kevin Wright, a corn and soybean grower and commercial drone pilot in Illinois. 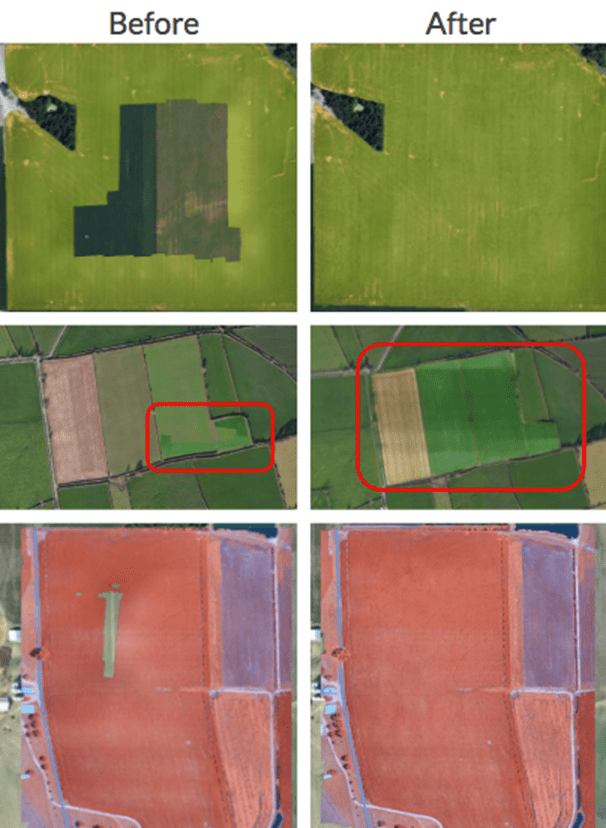 “Being able to close a hole as big as that,” he said, referring to the difference between his original map, and he reprocessed complete map, “it’s very impressive — especially for a map flown in windy conditions. It just proves that DroneDeploy is headed in the right direction as far as being able to solve these particular problems.”

Not only were the reprocessed maps complete, many of them also showed significant improvements in accuracy and image sharpness.

This is just one of many improvements DroneDeploy has been making to improve its offering for agriculture — others include the release of real-time, offline field mapping with Fieldscanner.

Want to learn more about how to use DroneDeploy on the farm this season? Register for our upcoming webinar, attend our UAVs in Agriculture workshop at InfoAg or come visit us in booths 15&16.

DroneDeploy is the leading cloud software platform for commercial drones. Trusted by users in more than 160 countries across a variety of industries including agriculture, construction, mining and insurance, DroneDeploy is transforming how businesses collect, manage and interpret drone data to improve workflows. Scalable image processing, data storage and sharing in real-time form the backbone of the DroneDeploy platform, while a user-friendly interface makes it intuitive to fly and capture drone data, view and analyze maps on any device. The robust DroneDeploy platform enables users to leverage best-in-class apps through the drone industry’s largest App Market, and to build custom tools and integrations with open APIs.