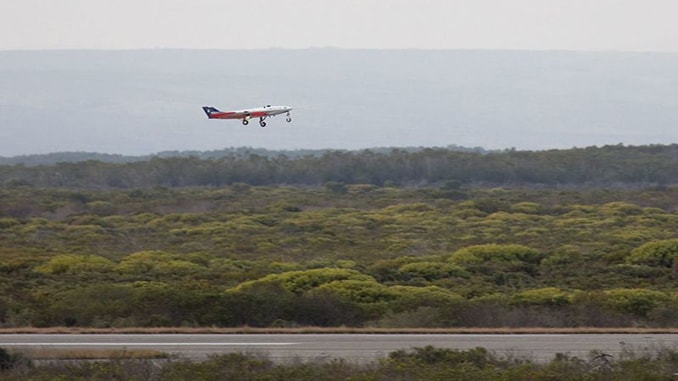 Airbus Defence and Space has successfully completed the first flight of its Sagitta unmanned jet-propelled demonstrator in Overberg, South Africa.

During the test, the demonstrator flew completely autonomously for around seven minutes.

The demonstrator has been developed under the ‘Open Innovation’ / Sagitta national initiative launched by Airbus in 2010.

It has been developed in collaboration between Airbus and with institutes from the German technical universities of Munich and Chemnitz, the University of the Federal Armed Forces (Universität der Bundeswehr) in Munich, the Ingolstadt University of Applied Sciences, and the German Aerospace Centre DLR.

The goal of the program, which started with a feasibility study of the flying-wing configuration, is to develop advanced technologies for unmanned flight.

Airbus Defence and Space Engineering head Grazia Vittadini said: “With Sagitta’s first flight, we have proved just how successful a cooperation between industry and academic partners can be in the area of basic research.

“With Sagitta’s first flight, we have proved just how successful a cooperation between industry and academic partners can be in the area of basic research.” - Grazia Vittadini

“We are increasingly shifting our focus towards these kinds of innovative concepts, in particular for the development of unmanned aerial vehicles, so that we can develop products quickly and efficiently for a growing market.”

The latest flight marks the completion of the first trial phase, which also comprised an extensive series of ground tests.

The research vehicle was designed as a flying wing and is powered by two 300N turbines.

With a maximum take-off weight of 150kg, the ‘electronic flying device’ is controlled by electromechanical actuators instead of hydraulic components.