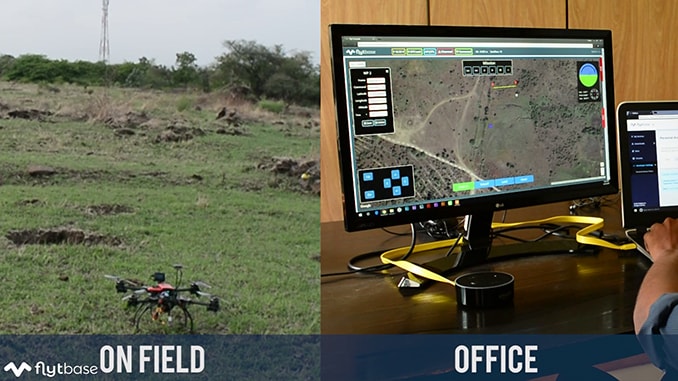 FlytBase, Inc., a startup building developer platforms for connected intelligent drones, today announced the release of industry’s first Drone-API as a Service offering. While most modern businesses run on cloud-based applications, connecting drones to the cloud has been quite challenging. FlytBase plans to change that with their FlytBase Cloud platform.

Over last few years, IoT (Internet of Things) industry has designed communication protocols to help “things”  connect to the internet. However, requirements for drones are very different from regular “things”. Typical IoT devices are deployed in very large numbers, consume low-power, and send small amounts of data spread over long durations of time. Drones, on the other hand, are deployed in smaller fleets, have large lithium-based batteries, and send a large amount of data over a short period of time. Drone applications need real-time navigation, telemetry and payload access over a high-bandwidth secure link. Further, drones are often intelligent devices, taking several critical decisions onboard, unlike most IoT devices which rely on cloud for their intelligence. To meet these specific drone requirements, FlytBase has designed a custom protocol, from the ground-up. FlytBase Cloud makes use of this protocol to efficiently connect drones to your cloud-based business applications in real time.

Drones are today being successfully used in a number of industry verticals, such as, agriculture, construction, surveys and inspections. However, most of the applications are restricted to a single operator on the field, and do not directly communicate with the cloud. Several cloud-based drone applications, such as, DroneDeploy, Propeller and Redbird need the data from the drones to be downloaded manually, after the flight. This data is then required to be uploaded to their cloud servers for post processing. With FlytBase Cloud, such applications can be completely automated.

A few vertically integrated solutions, such as those offered by Airware, Precision Hawk, Kespry do offer higher levels of integration and connectivity. However, these are not open for developers to customize and build their own integrations with business apps. For example, if one had to build a drone that is connected over cloud and follows voice commands from Alexa, it would take several days to put it together. With FlytBase Cloud, it can be done in minutes.

With FlytBase  Cloud, developers can easily build applications like, automating fleet of drones to scan the warehouse and update your inventory in Salesforce every week, with no manual intervention. “We are moving towards an era of Internet of Drones (IoD). FlytBase is excited to offer industry’s first platform to help developers quickly build and deploy customized IoD solutions”, says Founder and CEO of FlytBase, Nitin Gupta.

FlytBase has partnered with Built.io to provide ready integration of drones with hundreds of business apps, such as, Salesforce, Box, Slack, Twilio, Cisco Spark, Zendesk, Dropbox, Nest, YouTube. This allows users to easily build automated workflows, that leverage drones as part of the solution, without writing any code.

With little standardization in drone hardware and communication protocols, it has been extremely challenging for developers to work with hardware from different manufacturers. The software applications designed for drones from one manufacturer, do not work with others.

Dhiraj Dhule, Director of Strategic Projects at FlytBase, summarizes the efforts of FlytBase to address this challenge, “FlytBase has been working on building adapters to support a large number of drone manufacturers, and offers an unified set of APIs for developers. This isolates the application developers from the underlying drone hardware, and makes their applications portable across drones”. FlytBase Cloud is built to support these APIs, and it thus compatible with all major drone platforms available today.

FlytBase also provides a cloud-based drone simulator, FlytSim, for developers to completely test their applications in simulation, before deploying them on real hardware. “There are a large number of software developers with no prior background in drones. FlytSim helps them build and test their drone applications much faster, cheaper and without any of the risks associated with direct implementation on hardware”, says Sharvashish Das, Director of Engineering atFlytBase.

Internet connectivity is the next frontier for drone technology. With easy access to 4G/LTE networks across the world, Internet of Drones (IoD) is expected to unleash a new wave of innovation and drive further growth in this sector. FlytBase Cloud lowers the entry barrier and provides ready tools for developers to leverage this technology for building innovative products and for offering new services. Besides applications that have already found wide adoption, such as, surveys and inspections, applications that need live connectivity with a large number of drones, such as, use of drones for logistics and smart-cities, would greatly benefit from this technology.

FlytBase is a startup based out of Palo Alto, Silicon Valley, building developer tools for connected intelligent drones. Its flagship product, FlytOS, is the world’s first drone operating system that works across the widest range of hardware options, including, those from Intel, Nvidia, Qualcomm, Raspberry Pi and Samsung. FlytBase also offers, FlytSim, a simulator for drone applications, and Drone Software Development Kits for web and mobile platforms.

FlytBase recently received the TiE50 award at TiEcon Silicon Valley, and was a part of Cisco Launchpad accelerator program.