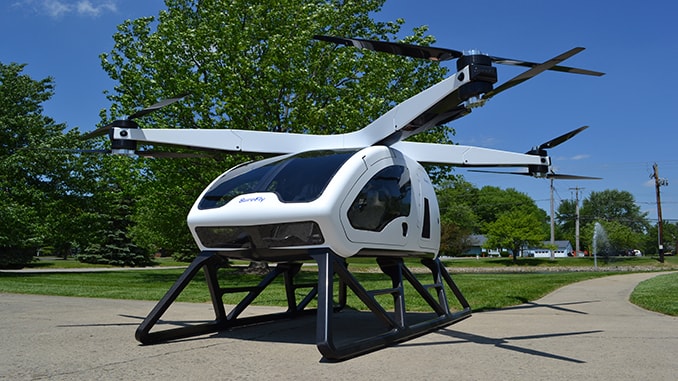 Workhorse Group Inc., an American technology company focused on providing electric mobility solutions to the transportation sector, today announced that it will display the SureFly™ helicopter concept for the first time in the U.S. at EAA AirVenture Oshkosh 2017 (BOOTH #IC-9 in the EAA Innovation Center).  The booth will also display the Workhorse HorseFly™ package delivery drone.

The goal of SureFly is to be safer and more stable than a typical helicopter due to its redundant design which includes a lightweight Carbon Fiber fuselage, four propeller arms, two fixed contra-rotating propellers on each arm, a backup battery to drive the electric motors in the event of engine failure and a ballistic parachute that safely brings down the craft in the unlikely event of an engine failure.

SureFly’s hybrid design leverages Workhorse’s platform battery packaging, management systems and controls utilized in its currently commercialized medium-duty, range-extended battery electric vehicles. It features a gas combustion engine generating electricity and a parallel battery pack offering a redundant backup power source, eliminating the need for long battery charging periods between flights. SureFly is designed to be easy to pilot, and is expected to be capable of carrying pilot and passenger or cargo up to 70 miles. After a quick refill, SureFly is ready for the next hop.

Early models will be pilot-operated.  The goal is to introduce future models featuring autonomous flight capable of carrying payloads of up to 400 pounds. Anticipated markets for the SureFly are precision agriculture, emergency responders, city commuters and military.

The SureFly is currently undergoing ground testing in Ohio and the company anticipates its first human test flight later this year with FAA certification in 2019. Workhorse estimates the SureFly to cost about $200,000 and is accepting pre-orders at its website, www.workhorse.com.

Workhorse is a technology company focused on providing electric mobility solutions to the transportation sector. As an American original equipment manufacturer, we design and build high performance battery-electric vehicles including trucks and aircraft. We also develop cloud-based, real-time telematics performance monitoring systems that are fully integrated with our vehicles and enable fleet operators to optimize energy and route efficiency. All Workhorse vehicles are designed to make the movement of people and goods more efficient and less harmful to the environment. For additional information visit www.workhorse.com.

NOAA and Ryka UAS Teaming Up on Wetland Restoration Project