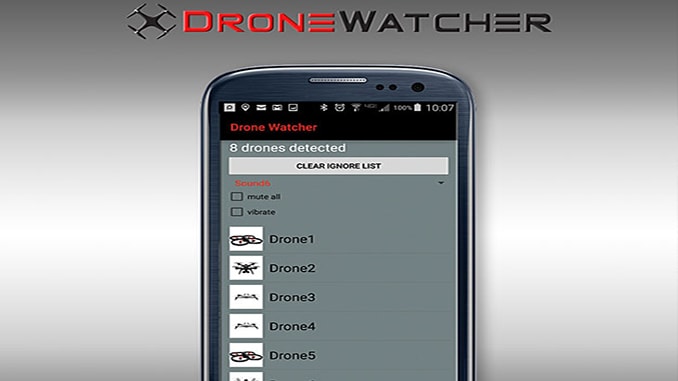 DeTect has announced the release of the Pro version of the popular DroneWatcher APP – the app that makes Android smartphones and tablets into personal drone detectors for security and privacy protection. The $5.00 (US) Pro upgrade version has all the features of the free app plus provides detailed information on the detected drone, includes a signal strength indicator, and allows multiple users to create a crowdsourced network for wide-area drone monitoring. The free and Pro versions of the app are available on Google Play.

When installed on a smartphone, tablet or other Android device, the DroneWatcher APP makes the device into a drone detector with a detection range of ¼ to ½ mile. With the Pro version users can group multiple devices together to form low-cost, wide area mesh networks for monitoring of large areas and, when one device detects a drone, all devices in the group will be alerted. The signal “power bar” also allows each app user to determine the general direction of detected drone’s controller and the drone ID feature shows the drone type and unique ID number. The app currently detects 90-95% of the non-encrypted consumer drones on the market. For added, multi-layer security, the DroneWatcher APP can integrate with DeTect’s DroneWatcher RF and HARRIER Drone Surveillance Radar (DSR) sensors to provide a near 100% drone detection and defense solution.