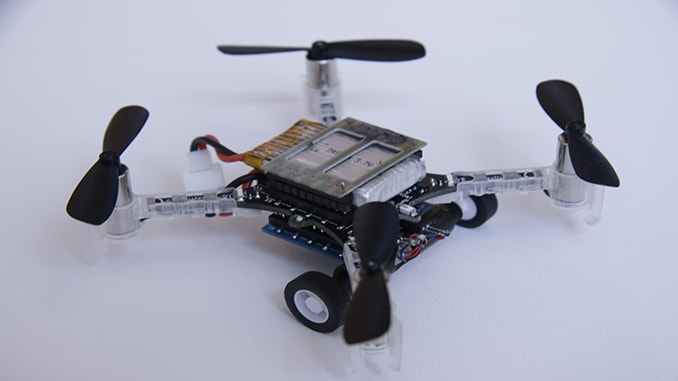 Being able to both walk and take flight is typical in nature – many birds, insects and other animals can do both. If we could program robots with similar versatility, it would open up many possibilities: picture machines that could fly into construction areas or disaster zones that aren’t near roads, and then be able to squeeze through tight spaces to transport objects or rescue people.

The problem is that usually robots that are good at one mode of transportation are, by necessity, bad at another. Drones are fast and agile, but generally have too limited of a battery life to travel for long distances. Ground vehicles, meanwhile, are more energy efficient, but also slower and less mobile.

Researchers from MIT’s Computer Science and Artificial Intelligence Laboratory (CSAIL) are aiming to develop robots that can do both. In a new paper, the team presented a system of eight quadcopter drones that can both fly and drive through a city-like setting with parking spots, no-fly zones and landing pads.

“The ability to both fly and drive is useful in environments with a lot of barriers, since you can fly over ground obstacles and drive under overhead obstacles,” says PhD student Brandon Araki, lead author on a paper about the system out of CSAIL director Daniela Rus’ group. “Normal drones can’t maneuver on the ground at all. A drone with wheels is much more mobile while having only a slight reduction in flying time.”

Araki and Rus developed the system along with MIT undergraduate students John Strang, Sarah Pohorecky and Celine Qiu, as well as Tobias Naegeli of ETH Zurich’s Advanced Interactive Technologies Lab. The team presented their system at IEEE’s International Conference on Robotics and Automation (ICRA) in Singapore earlier this month.

The project builds on Araki’s previous work developing a “flying monkey” robot that crawls, grasps, and flies. While the monkey robot could hop over obstacles and crawl about, there was still no way for it to travel autonomously.

To address this, the team developed various “path-planning” algorithms aimed at ensuring that the drones don’t collide. To make them capable of driving, the team put two small motors with wheels on the bottom of each drone. In simulations the robots could fly for 90 meters or drive for 252 meters before their batteries ran out.

Adding the driving component to the drone slightly reduced its battery life, meaning that the maximum distance it could fly decreased 14 percent to about 300 feet. But since driving is still much more efficient than flying, the gain in efficiency from driving more than offsets the relatively small loss in efficiency in flying due to the extra weight.

“This work provides an algorithmic solution for large-scale, mixed-mode transportation and shows its applicability to real-world problems,” says Jingjin Yu, a computer science professor at Rutgers University who was not involved in the paper.

The team also tested the system using everyday materials like pieces of fabric for roads and cardboard boxes for buildings. They tested eight robots navigating from a starting point to an ending point on a collision-free path, and all were successful.

Rus says that systems like theirs suggest that another approach to creating safe and effective flying cars is not to simply “put wings on cars,” but to build on years of research in drone development to add driving capabilities to them.

“As we begin to develop planning and control algorithms for flying cars, we are encouraged by the possibility of creating robots with these capabilities at small scale,” says Rus. “While there are obviously still big challenges to scaling up to vehicles that could actually transport humans, we are inspired by the potential of a future in which flying cars could offer us fast, traffic-free transportation.”