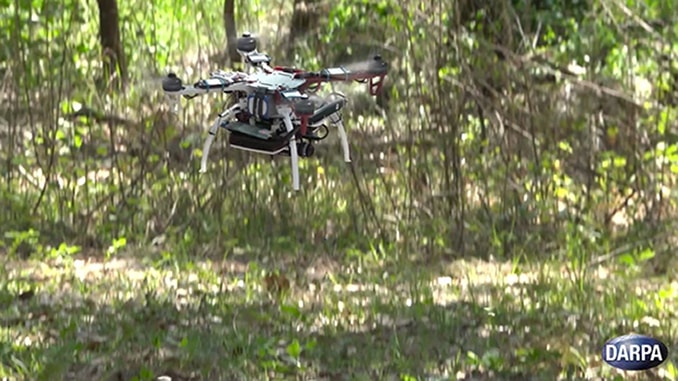 DARPA’s FLA program is advancing technology to enable small unmanned quadcopters to fly autonomously through cluttered buildings and obstacle-strewn environments at fast speeds (up to 20 meters per second, or 45 mph) using onboard cameras and sensors as “eyes” and smart algorithms to self-navigate. Potential applications for the technology include safely and quickly scanning for threats inside a building before military teams enter, searching for a downed pilot in a heavily forested area or jungle in hostile territory where overhead imagery can’t see through the tree canopy, or locating survivors following earthquakes or other disasters when entering a damaged structure could be unsafe.

“The goal of FLA is to develop advanced algorithms to allow unmanned air or ground vehicles to operate without the guidance of a human tele-operator, GPS, or any datalinks going to or coming from the vehicle,” said JC Ledé, the DARPA FLA program manager. “Most people don’t realize how dependent current UAVs are on either a remote pilot, GPS, or both. Small, low-cost unmanned aircraft rely heavily on teleoperators and GPS not only for knowing the vehicle’s position precisely, but also for correcting errors in the estimated altitude and velocity of the air vehicle, without which the vehicle wouldn’t know for very long if it’s flying straight and level or in a steep turn. In FLA, the aircraft has to figure all of that out on its own with sufficient accuracy to avoid obstacles and complete its mission.”

The FLA program is focused on developing a new class of algorithms that enables UAVs to operate in GPS-denied or GPS-unavailable environments—like indoors, underground, or intentionally jammed—without a human tele-operator. Under the FLA program, the only human input required is the target or objective for the UAV to search for—which could be in the form of a digital photograph uploaded to the onboard computer before flight—as well as the estimated direction and distance to the target. A basic map or satellite picture of the area, if available, could also be uploaded. After the operator gives the launch command, the vehicle must navigate its way to the objective with no other knowledge of the terrain or environment, autonomously maneuvering around uncharted obstacles in its way and finding alternative pathways as needed.

The recent four days of testing combined elements from three previous flight experiments that together tested the teams’ algorithms abilities and robustness to real-world conditions such as quickly adjusting from bright sunshine to the dark building interiors, sensing and avoiding trees with dangling masses of Spanish moss, navigating a simple maze, or traversing long distances over feature-deprived areas. On the final day, the aircraft had to fly through a thickly wooded area and across a bright aircraft parking apron, find the open door to a dark hangar, maneuver around walls and obstacles erected inside the hangar, locate a red chemical barrel as the target, and fly back to its starting point, completely on their own.

Each team showed strengths and weaknesses as they faced the varied courses, depending on the sensors they used and the ways their respective algorithms tackled navigation in unfamiliar environments. Some teams’ UAVs were stronger in maneuvering indoors around obstacles, while others excelled at flying outdoors through trees or across open spaces.

The test runs had the combined feel of part air show, part live-fire exercise, with a palpable competitive vibe between the teams. “The range is hot, the range is hot, you are cleared to launch,” crackled the voice of the test director over the walkie-talkies audible in the adjacent team tents, giving a green light to launch an attempt. Sitting under his own shaded canopy, the director followed the UAV’s flight on two video monitors in front of him, which showed views from multiple cameras placed along the course. Metal safety screens, which resembled giant easels, protected the camera operators on the course, as well as teams and course officials and from any rogue UAVs.

Once a UAV was out of visual range, team members followed the progress on monitors. The first successful foray from sunlight through a doorway and into darkness brought a cheer. “It’s in the hangar!” came a gleeful cry over the walkie-talkies. And when a UAV maneuvered successfully around the interior obstacles and reached the targeted red chemical barrel, an official goal observer took to the microphone intoning: “Goal, Goal, Goal!”, indicating the UAV had reached the objective as verified by all three “goal cameras” pointed at the barrel. The final stretch involved the UAV flying back to the starting point and landing.

To be sure, there were sighs of despair as well. Sometimes a quadcopter would reach a point along the course and, inexplicably, hover as if dazed or confused about what to do next. After a pause, it would fly back to the starting point, having been programmed to do so if it didn’t know what to do next.

“I think it’s basically completely lost,” one researcher lamented after his team’s vehicle got close to the target in a clearing in the woods, but then took a wrong turn into another clearing and just kept going further away from the barrel. In that case, a safety pilot took over and landed the UAV so it wouldn’t be damaged, using the emergency RF link that had been installed for these experiments in the event a vehicle headed out of bounds or began flying erratically at high speed toward an object—which happened on several occasions. Undaunted by such glitches, teams would return to their tents, make some tweaks to the algorithms on laptops, upload them to the bird, and then launch again for another try.

And no, not every landing was soft. A few times the quadcopter was flying so fast, the safety pilot didn’t have time to make the split-second decision to take over. More than once that resulted in a wince-evoking “crunch”—the hallmark acoustical signature of a UAV smacking squarely into a tree or side of the hangar. Back to the team’s shade tent for some adjustments to the algorithm before uploading to a replacement craft. Each team had several UAVs on standby in their tents, and like pit crews at a raceway would quickly replace the broken bird with a fresh one to get in as many attempts as possible during their allotted 20-minute slot for each task.

During each day’s morning and afternoon obstacle-course runs, at least one team was able to fly the mission autonomously, including a return to the starting point or a location close to the start—to the applause of all researchers and the test evaluators sitting under their canopies.

Success was largely a matter of superior programming. “FLA is not aimed at developing new sensor technology or to solve the autonomous navigation and obstacle avoidance challenges by adding more and more computing power,” Ledé said. “The key elements in this effort, which make it challenging, are the requirement to use inexpensive inertial measurement units and off-the-shelf quadcopters with limited weight capacity. This puts the program emphasis on creating novel algorithms that work at high speed in real time with relatively low-power, small single board computers similar to a smart phone.”

Each team brought unique technologies and approaches for outfitting their UAVs. To hear a little about their approaches watch the video below:

“I was impressed with the capabilities the teams achieved in Phase 1,” Ledé said. “We’re looking forward to Phase 2 to further refine and build on the valuable lessons we’ve learned. We’ve still got quite a bit of work to do to enable full autonomy for the wide-ranging scenarios we tested, but I think the algorithms we’re developing could soon be used to augment existing GPS-dependent UAVs for some applications. For example, existing UAVs could use GPS until the air vehicle enters a building, and then FLA algorithms would take over while indoors, while ensuring collision-free flight throughout. I think that kind of synergy between GPS-reliant systems and our new FLA capabilities could be very powerful in the relatively near future.”