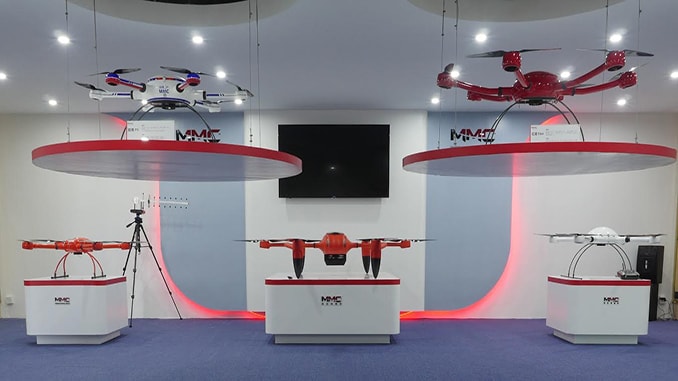 Chinese industrial drone manufacturer MMC has a view from the top of the drone industry. As it’s Shenzhen neighbor DJI has risen to market dominance in the recreational drone segment, MMC has achieved prominence in the commercial sector. With over 500% growth in the last few years, the company has sound funding, a global client base, and an enviable solution set.

The innovators behind the world’s first hydrogen-powered drone, they’ve been at the forefront of development in the industry. And, as MMC expands into new verticals and new territories, they are at the center of the top three drone industry trends this year.

Energy, agriculture, construction and law enforcement have been strong verticals for the drone industry for some time. But as the technology solutions mature, the applications available in those verticals is expanding. Solutions have shifted beyond just imagery and data collection to performing tasks like power-line stringing, crop spraying, and 24-hour surveillance.

Previously, many commercial applications were performed by small quads with data gathering payloads – a prosumer drone like those manufactured by DJI or Yuneec. But as applications expand, customers are looking for true industrial drones – those that are weather-resistant, offer long flight times, and can handle multiple payloads. As a standout provider of industrial drones like their Spider Solution for energy work, MMC has seen their power-line stringing business expand by 200 % in the last two years.

“The ROI for these applications is so significant – they’re being adopted rapidly,” says MMC Director Ling Lu. “The value is there.” The MMC family of drones offers a plug-and- play payload system, with a toolkit of hundreds of possible payloads and the option of customization. This kind of multi-purpose drone differs significantly from a smaller consumer or prosumer craft, as it can handle a wide variety of applications for a single investment.

The MMC family of drones offers a plug-and- play payload system, with a toolkit of hundreds of possible payloads and the option of customization. This kind of multi-purpose drone differs significantly from a smaller consumer or prosumer craft, as it can handle a wide variety of applications for a single investment.

And the shift is going in both directions. As industrial manufacturers like MMC adopt the best elements of military technology, military forces are buying MMC drones and expanding their programs to include a whole new set of applications. Smaller industrial drones are ideal for many military uses: including border patrol, surveillance, crowd management and security. MMC’s ability to customize their drone – or offer multiple payloads through the plug-and- play system – make drones like the long-endurance hydrogen-powered drone HyDrone 1550 or the  A6 Plus heavy payload drone ideal tools for military forces around the globe. Easy to fly, well- supported and less expensive than aircraft produced by traditional military providers, MMC’s industrial drones are gaining major market share in the military sector.

Service is a Key Component

As the applications for commercial drones expand, services have become a key component in drone solutions. Providers need to overcome all of the barriers to entry for their customers. MMC has taken a dominant position in the commercial drone market because of their total solution approach: they offer training, flight planning, pilot services, and after sales service to help customers all over the world launch their drone programs. It’s a major differentiator, and one that has helped spread drone technology to new areas – a drone without the services to back it up can’t provide value in emerging markets.

The option for customization is another major factor in the company’s success. The commercial industry is shifting quickly – only manufacturers willing to recognize that their customers may come up with new applications and requirements are able to keep up.

As the industry continues to grow and change, MMC will continue to be nimble in adjusting to new technology and new markets. “We’ve been able to achieve a lot by being the first to recognize new opportunities,” says Lu. “It’s an exciting time and an exciting place to be, at the forefront of a new industry.”

Memery Takes the Headache Out of Drone Video With Launch of Free Mobile App, Dragonfly