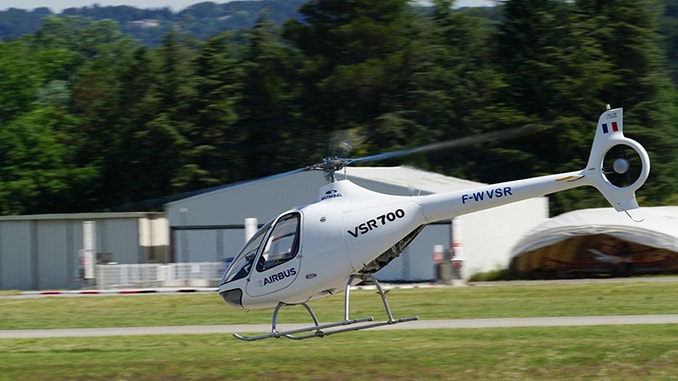 Airbus Helicopters recently started autonomous flight trials of a VSR700 Optionally Piloted Vehicle (OPV) demonstrator, paving the way for a first flight of the actual VSR700 prototype in 2018. A light military rotary-wing tactical unmanned aerial vehicle, the VSR700 is being developed jointly by Airbus Helicopters and Helicopteres Guimbal, the original manufacturer of the civil-certified Cabri G2 helicopter from which the VSR700 is derived.

“We are pleased to have achieved this milestone only eight months after starting work on the OPV” said Regis Antomarchi, head of the VSR700 program at Airbus Helicopters. “The OPV is able to autonomously take-off, hover and perform stabilized flight and maneuvers. It will help us mature the technologies associated to autonomous flight and confirm the suitability of the Cabri G2 platform for the VSR700, ahead of the first flight of the prototype next year”, he added.

“Passing this first step of autonomous flights with a safety pilot onboard allows us to validate the integration of Airbus Helicopters’ flight control system with the aerial vehicle and its specific engine installation” said Bruno Guimbal, President & CEO of Helicopteres Guimbal.

This phase of flight trials with a safety pilot will focus on refining Airbus Helicopters’ automatic flight control system aboard the OPV, eventually leading to fully autonomous flights without a safety pilot. The VSR 700 flight control system is a fully-digital, multi-channel system with a very high level of redundancy. It takes advantage of Airbus Helicopters unique expertise in digital autopilots.

Sea trials of a manned Cabri G2 have also recently taken place with the support of a French Navy air defence frigate in order to assess the flight envelope of the VSR700 platform for shipborne operations.

The VSR700 will be capable of carrying a wide array of mission equipment with a maximum capacity of up to 250 kg. Depending on the mission, its endurance could exceed 10 hours.

Developed to meet navies’ requirements for a shipborne rotary-wing tactical unmanned aerial vehicle and complement to manned helicopters, it could also be used in land-based military operations to carry out ISTAR (Intelligence Surveillance Target Acquisition and Reconnaissance) missions, thanks to the VSR700’s optical sensors and maritime/land radar.

The VSR700 will have a much lower operating cost than a helicopter not only thanks to its well-proven civil base vehicle and low-consumption diesel engine, but also because it requires fewer resources and less manpower to operate and maintain it.