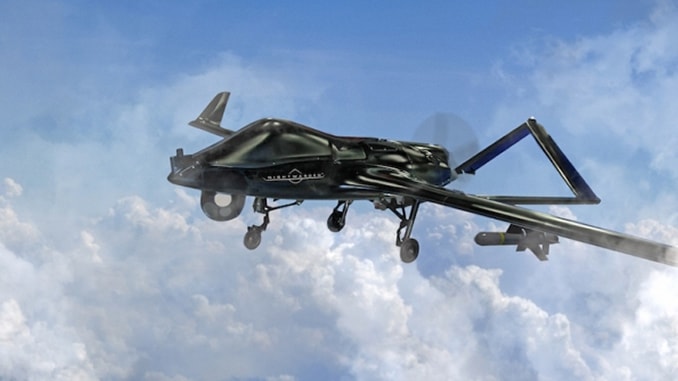 “Since first announcing the Shadow M2, we’ve made significant improvements and enhancements to the system – so much in fact, that there are many differences between the two platforms,” says Unmanned Systems Senior Vice President & General Manager Bill Irby, “For example, compared to our internal development model, the NIGHTWARDEN TUAS offers greater flexibility and combat capability, beyond-line-of-sight satellite communications (SATCOM) features, as well as enhanced command-and-control through Synturian™, Textron Systems’ new family of multi-domain control and collaboration technologies.”

Textron Systems next-generation NIGHTWARDEN TUAS provides an optional SATCOM package, giving it a capability common to much larger Group IV Medium Altitude Long Endurance (MALE) platforms. The system’s range of up to 1100 kilometers provides significant operational flexibility, as well as a “fly-from-home-or-hub” station capability. The system features an open architecture and a dual-payload bay, allowing for additional capabilities such as communication relay, sense-and-avoid equipment, or additional payloads such as electronic attack, signals intelligence or communications intelligence. The system also allows for installation of further intelligence, surveillance and reconnaissance (ISR) payload capacity and strike capabilities, such as the Textron Systems Weapon & Sensor Systems precision guided glide munition, Fury®. The NIGHTWARDEN TUAS offers a maximum speed of up to 90 knots, an endurance of up to 15 hours and a payload capacity of up to 130 pounds. The new platform also features a water-cooled, rotary engine, which provides a reduced acoustic signature, as well as increased propulsion performance and greater electrical output over Textron Systems’ previous TUAS models.

The NIGHTWARDEN TUAS has been subject to significant internal testing and demonstration efforts, tallying more than 400 hours of flight time for potential customers including delegations from Europe, the Mideast and the Asia-Pacific region. The new system, which has demonstrated runway-independence by landing on unimproved surfaces, typically uses an automated take-off and landing system, but also incorporates enhanced landing gear, remote taxi and an air vehicle parachute for emergency operations.

Since its introduction in 1999, the Shadow TUAS has accumulated more than one million flight hours, making it the only unmanned aircraft system of its size to accomplish this significant milestone. Today, the Shadow TUAS conducts ISR missions, as well as target acquisition operations for the U.S. Army, U.S. Marine Corps, U.S. Special Operations Command (SOCOM), as well as armed forces in Italy, Sweden and Australia.

The NIGHTWARDEN TUAS is on display at the Paris Air Show from June 19-22 in Pavilions A2 and A4, as well as at other trade shows throughout 2017.