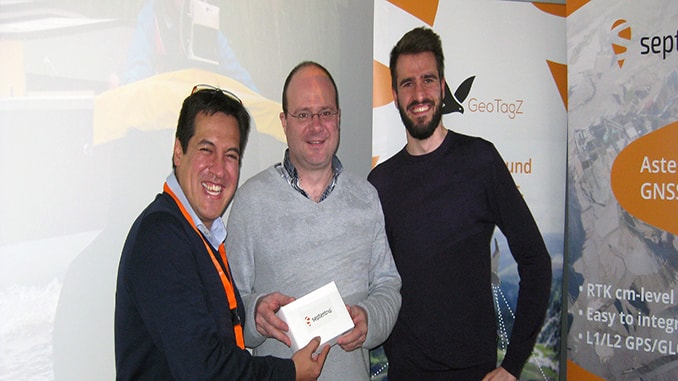 Septentrio, a leading designer and manufacturer of GNSS solutions, recently awarded the KU Leuven Ecochallenge team – the winners of the Galileo Masters (Flanders Challenge) of the European Satellite Navigation Competition (ESNC) – a special prize of the AsteRx-m UAS receiver for their proposal to use high-precision high-reliability Galileo receivers to modernise inland waterway transport by introducing autonomous technology for the vessels.

The judging panel were impressed with the proposal from the KU Leuven Ecochallenge team to use high-quality Galileo receivers to improve the safety and efficiency on autonomous and existing vessels (which can be retrofitted with the solution.) It was a very ambitious and offers a pragmatic step towards rejuvenating inland waterways as a viable ecological alternative for freight transportation.

The KU Leuven team also participated in Ecorace Challenge organised by the Flemish Waterways Agency and was both the overall winner in the cargo category as well as being voted the most innovative vessel in 2016.

The AsteRx-m receiver board won by KU Leuven Eco-challenge team is a leading GNSS solution for applications in autonomous and unmanned vehicles, such as drones. The AsteRx-m UAS offers centimetre-level accuracy at only 700 mW using L1/L2 GPS and GLONASS RTK.

“As traffic continues to increase, exploiting inland waterways has been identified as a critical development for easing the pressure on road networks. High-precision high-reliability positioning technology using GNSS is an essential element of the development” stated Jan van Hees, Director of Business Development at Septentrio. He continued: “The KU Leuven team have demonstrated an innovative autonomous small vessel prototype already to move cargo safely and efficiently on the Flemish waterways and we look forward to continued collaboration as they further develop this technology for bigger ships.”

Dr. Geert Waeyenbergh of KU Leuven who mentored the KU Leuven Ecochallenge team stated: “The team is very pleased with their performance winning the Septentrio Prize and the Ecorace Challenge together in the same year.” He continued: “The received AsteRx-m will further help research and development of better ships going into the future.”

About Septentrio:
Septentrio designs, manufactures and sells high-precision multi-frequency multi-constellation GPS/GNSS equipment, which is used in demanding applications in a variety of industries such as marine, construction, agriculture, survey and mapping, geographic information systems (GIS), and unmanned aerial vehicles (UAVs) as well as other industries. Septentrio receivers deliver consistently accurate GNSS positions scalable to centimetre-level, and perform solidly even under heavy scintillation or jamming. Septentrio receivers are available as OEM boards, housed receivers and smart antennas.

Septentrio offers in-depth application and integration support to make its customers win in their markets. Septentrio is headquartered in Leuven, Belgium, and has offices in Torrance, California, and Hong Kong, and partners around the world.