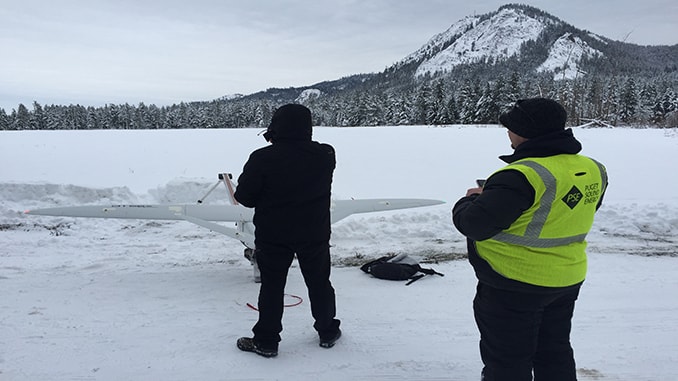 Delair-Tech announced today that it has performed a series of test acquisitions for Puget Sound Energy (PSE) using LiDAR and photogrammetry sensors to demonstrate the added value of its UAVs for electric line inspections and digitization. The series of flights highlighted the significant advantage Delair-Tech products represent for linear infrastructure applications, even more so under BVLOS scenarios which will allow flying significant portions per given flight.

The acquired data was directly uploaded onto Delair-Tech’s servers for further processing and analysis within the US via Delair Analytics and with the help of Quantum Spatial. At the end of the mission, Puget Sound Energy was provided with a classified point cloud as well as a digitized model of the transmission lines over the flown segment. The products were delivered within formats compatible with PLS-CADD, a software widely used within the Power & Utilities industry.

“This mission successfully proves Delair America’s readiness to deploy its custom solutions within the US now that the Part 107 regulations are in place.” says Benjamin Benharrosh, co-founder of Delair-Tech. Indeed, Delair-Tech has strongly benefited from its position as a leading UAV manufacturer, and from the BVLOS-friendly regulations in some European countries, to develop turnkey solutions for specific industries such as power and utilities.

Puget Sound Energy’s  early adoption of UAV technology provides a solution for them to stay a distance ahead for managing its large infrastructure network. In addition to the performed mission, Delair America provided training to the PSE operations team on the two fixed-wing systems used for the data acquisition over their utilities infrastructure. “The results provided were of high accuracy and quality confirming the significant advantage of using UAVs in our industry,” said Mitch Droz, Commercial Development Manager at Puget Sound Energy.
About Delair-Tech
Headquartered in France and South Pasedana, California, Delair-Tech is a global leader in commercial drone solutions, enabling leading industries to process aerial imagery into actionable business intelligence. Specialized in drone manufacturing and aerial data processing, Delair-Tech offers end-to-end UAV solutions, including hardware, software and services. Core industry markets include Geospatial, Agriculture, Transportation, Power&Utilities, Oil&Gaz, Security&Defense and Emergency. Delair-Tech is represented in more than 80 countries with 150 resellers worldwide.
More on: www.delair-tech.com