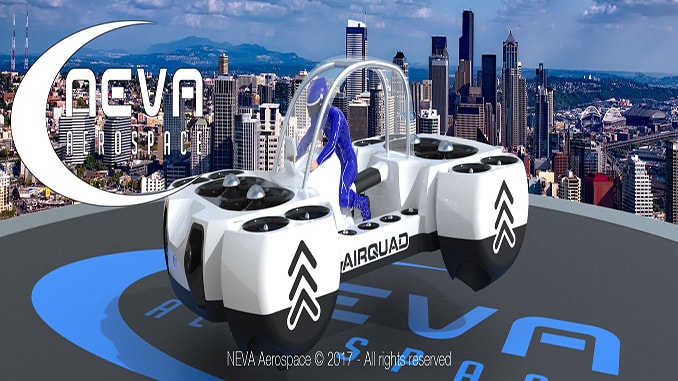 European consortium Neva Aerospace, whose aeronautical engineering and VTOL technology is emerging as the realistic front runner for heavy duty electric and hybrid aviation, is sharing its Neva AirQuadOne commercial concept for personal manned aircraft with visitors to the Paris Air Show (19- 25 June).

AirQuadOne benefits from the power and VTOL capabilities of Neva’s static thrust electric turbofan (ETF) technologies, developed and now proven by Neva Consortium members in the UK and Germany. This is the same technology that is also available to OEM developers as stand-alone turbofans (2.5 – 15kgf) and modular turbo-drones (MTOW up to 50kg). See more information HERE.

The AirQuadOne is expected to weigh around 530kg, including 150kg of batteries for the full electrical version and a 100kg for the pilot. Journey times up to 30 minutes, depending on mission and load, including vertical take-off and landing. Linear flight will be up to 80 Km/h at altitudes of up to 3,000 feet.

Neva is now starting to work with regulators and pilots to seek light aircraft certification within the USA(FAA) and EU (EASA).  Neva AirQuadOne will have 24/7 traffic management support when flying, with an emergency satcom connection.

Applications for the manned craft are foreseen to include search & rescue, recreational flying, aerobatics,  patrols & defense, transportation, and personal air taxis. Unmanned versions will be able to lift payload up to 100kg and replace cranes and helicopters for delivery to challenging locations.

Neva expects the battery pack to be similar and/or compatible with those of cars, with recharging at standard electrical stations via a direct wire connection, induction or a battery pack switch. Neva is also looking at hybridization solutions for range extension.

The Neva AirQuadOne will have 24/7 flight management support when flying, with an emergency satcom connection.

In line with its commitment to sustainability, Neva plans to use recycled carbon in the manufacturing process as it already does today for most its parts.

Neva Aerospace co-founder and chairman said: “We have been working on the AirQuadOne concept since 2013, but waited to share it until our static thrust technology was proven.

“It is another step along our inception roadmap, which is proving to be realistic and achievable. Our long-term plans are coming to fruition. The Neva technology that is already available now and concepts like Neva AirQuadOne are only the beginning.

“This technology will also be disrupting the short-termism that has threatened to dominate the investor market. As the low-tech hobby drone market stagnates for investors, serious electric aviation becomes a real financial opportunity.”

Neva co-founder and chief science officer Prf. David Brotherton-Ratcliffe: “This is an exciting use of our principles for 3D distributed propulsion with electric turbines. This approach provides safety and control through redundancy.  The only limitation we have today is the current limitation of the battery technology available.

“The next steps for us will be ensuring redundancy in flight controls and energy sources.”