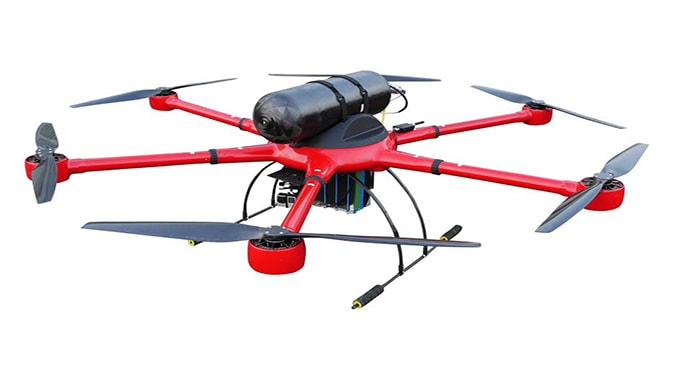 A growing number of people these days are exploring ways to break current limitations on Time-in- the-air (TITA) for electric UAVs. There are now three alternatives to extend the amount of time that electric drones can remain in the air performing their mission: tethered devices, solar power, and in-the- field rapid battery replacement. All three solutions present considerable extensions to TITA but have limitations associated with replacing conventional and commonly used technology with new and, in some cases, cumbersome alternatives.

Now the energy industry seems to be warming (no pun intended) to the idea of Fuel Cell Power Systems and the many advantages that this technology, first proposed in 1838 by William Grove, a Welsh physicist, and part-time lawyer, bring to the table.

Today, restrictions imposed on small commercially available drones of flying times of 25 minutes or less (depending on the number of rotors and/or load) are being challenged by a number of manufacturers both here in the USA, Europe and China using fuel cells.

For the purpose of this article, we focused on two innovators in the field of fuel cells: MMC, headquartered in the province of Shenzhen, PR China and Protonex based in Massachusetts. Both these private companies are making significant inroads in the developing and commercialization of fuel cell power system for regular use in UAVs with missions which require longer time in the air.

MMC has focused on the use of Hydrogen as the main source of fuel for their power cells. MMC is currently manufacturing and distributing two models of fuel cells, HyDrone 1800 and HyDrone 1550 with endurances (TITA) of 4.5 hours and 2.5 hours respectively.

When we inquired about the possibility of using these alternative power sources for commercially available UAVs other than the MMC drone models, MMC officials clarified that their hydrogen fuel cells are designed for a wide range of popular commercial drones, both fixed-wing and multi-rotors, such as DJI M600, DJI M600 Pro and other heavy-payload drones.

Similarly, Protonex has focused on the use of Proton Exchange Membrane technology for small, light UAV applications weighing less than 20 lbs. The hydrogen is stored in a chemical hydride cartridge and liberated as the system requires, while the oxygen comes from the air. The fuel cell is hybridized with a battery to provide peak power required for launch or climbing. The system features power generation 2 to 3 times the specific energy of LiPo batteries.

The main advantage of fuel cells is the fact that they produce energy as required versus batteries which simply store energy and release it on demand. Every fuel cell requires two components, one is the main body of the power generating unit and the other is the fuel tank, being hydrogen or any other gas or liquid. However, since fuel cells use oxygen from the air for half the reaction, the energy density is much improved over batteries.

According to MMC, the hydrogen fuel cell weight is in direct relationship to output power and the volume of fuel, hydrogen in this case, is directly proportionate to the required, elements of flight. In other words, more fuel, more weight hence more time in the air. LiPo batteries can store and release electricity, while the fuel cell is mainly to generate electricity, so the ratio between weight and power generation is fixed; with fuel cells the tank size could be increased or decreased to fit a specific mission with the power generating unit staying the same.

For example MMC’s HPS-1800 hydrogen fuel cell can be compared in terms of weight vs. output power against a lithium battery. The weight of the HPS-1800 is 9.2kg, and its power output is 1800W, the potential energy storage in the hydrogen tank is 4500Wh, so its energy density is 490Wh/kg, which is twice that of the LiPo battery.

When asked about the comparison between a fuel cell which requires an engine and a fuel tank, strikingly similar to a small internal combustion engine, both manufacturers were adamant that the reliability of the fuel cells was considerably better.

One key element of the advantage of fuel cells over internal combustion engines is the lack of moving parts and therefore complete absence of lubricants and a dramatic decrease in maintenance costs and unit replacement.

While manufacturers of fuel cells are racing to lower weight and increase output, people on the battery side of the industry are skeptical fuel cells are the way of the future. According to some engineers we interviewed for this article and who asked to remain anonymous, the current state of LiPo battery technology is plagued with inefficiencies and the improvements to lithium batteries which are possible with new materials, manufacture optimization and energy-release software will make these batteries more efficient and comparable to fuel cells.

If we compare the energy density of today’s LiPo to the equivalent product a decade ago we see a steady improvement of about 7% a year, which is definitely not a revolution, but a slow evolution.

Another big problem with some fuel cells is that they generate a lot of heat, approximately equivalent to the electricity produced up to 1,000o C in some cases.

Removal of the heat is an integration challenge in an industry where plastic is a large component of every small UAV. The use of delicate thermal or infrared sensors might be affected by this close source of temperature interference.

For all of the above we have to conclude that, even though fuel cells can increase time in the air considerably, the “silver bullet” that the UAV industry is waiting, and expecting from the battery industry, is nowhere near the horizon. Fuel cells, especially low-temperature PEMs are very effective and efficient for certain applications and the extension of TITA is considerable. If the fuel cell manufacturers continue to mature this technology at the current rate, we could see a wave of UAV products in the near future with a completely new set of capabilities.

Once again we come back to the fact that in order for these gains to be meaningful we need a regulatory  environment that allows flights beyond visual line of sight (BVLOS); in the meantime every manufacturer of UAVs and associated products is preparing for the day this becomes a reality and the race is on.

No Replies to "Knowledge Base Presented By MMC "Hydrogen Fuel Cells: The Answer to Time-In- The-Air Restrictions?""