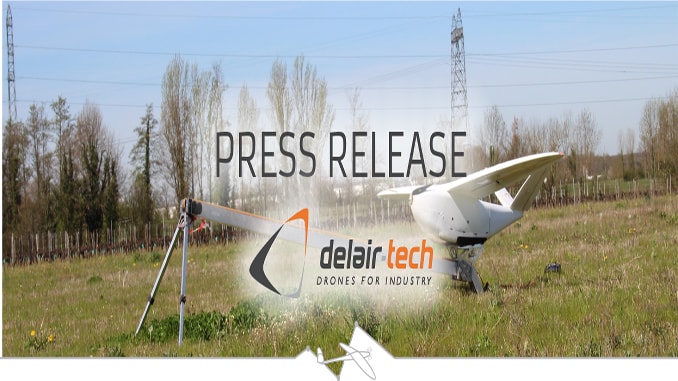 Delair-Tech, a leading commercial drone company, announced today that its DT18 and DT26X drones have been selected as the official choice for French government agencies purchasing fixed-wing unmanned aerial vehicles.

The decision was made by the Union of Public Procurement Groups (UGAP) which acts as the purchasing conduit for government agencies across the country. The Delair-Tech drones will be added to UGAPs purchasing catalog which is used by public agencies such as firefighters, the army, police forces, departmental governments, research laboratories, universities, as well as private companies with a public service delegation.

The agreements will also provide training for two pilots, maintenance service, support in drafting of documents required to register as a drone operator, and creation of a drone testing and training facility. It also includes the capability to process and analyze the data collected by the drones through the company’s Delair-Stack software platform.

“We are delighted to have our UAV solutions including hardware, software and services, available in the catalog of UGAP. Our DT18 and DT26X drones offer examples of the many applications such as : aerial mapping and topographicsurveys for geospatial , analysis of environmental hazards (floods, landslides, forest fires, pollution),  inspection and securing and sensitive sites, management of emergency situations (civil security, natural disaster)” said Michael de Lagarde, president and co-founder of Delair-Tech. “For the surveillance market, the DT26 X offers a major competitive advantage through considerable economies of scale, with the drone capable of the same performance as a helicopter but for a price 10 times cheaper.”

The UGAP is a critical source for public sector purchasers who rely on its guidance. Indeed, within a few days of the deal’s publication, an agreement was reached between RTE, Transmission System of Electricity, and Delair-Tech on the purchase and training of UAV system. This first order is representative of the strong demand by French customers who want to use fully developed high-tech products made in France.

The move by UGAP is also a sign of its growing belief in the potential benefits of drones for the country’s public sector. In addition to selecting Delair-Tech’s DT18 and DT26X for long-range drones in its catalog, UGAP, the government’s purchasing agency, also has chosen Azur Drone and Air Marine to provide drone support services, and Novadem for its rotary-wing drones.

An event to announce details of the UGAP deal and a live demonstration of a drone flight will take place in Toulouse, France on 14th June. Thirty participants will attend to learn and understand what drone technology can bring in terms of information, performance, ROI and safety compared to traditional methods.