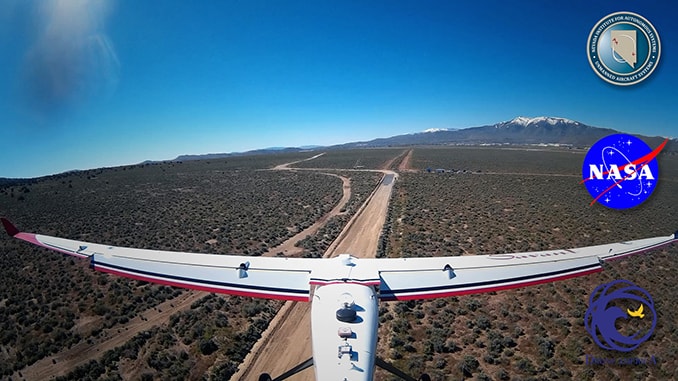 This NASA UTM test is part NASA’s research they are leading in close collaboration with the FAA and many industry partners. NASA and its partners are amid testing the next, more complex version of its UTM technologies with live, remotely-operated aircraft, or drones, at six different UAS Test Sites around the nation.  The three-week campaign, known as Technology Capability Level 2 (TCL2) National Campaign, began May 9th with the Nevada UAS Test Site as the first UAS Test Site to begin UTM operations this year.  The UTM National Campaign is focused on flying small drones beyond the pilot’s visual line of sight over sparsely populated areas near six of the Federal Aviation Administration (FAA) Test Sites.

The partners not only demonstrated drone flight capability, but also tested UAS traffic mapping, sensor and radar technology all of which were connected through a NASA UAS Service Supplier (USS) network to NASA Ames.

“The highly successful test at the Nevada UAS Test Site kicked off the data collection for NASA’s UAS Traffic Management (UTM) National campaign in which six FAA UAS Test sites and many industry partners integrate their technologies with NASA’s UTM research platform and test the UTM concept in a range of conditions representative of those present in the US Airspace,” said Tom Prevot, UTM project manager.

“For the Nevada NASA Team, we flew the longest multi-faceted NASA UTM flights to date in Nevada.  The beyond line of sight (BLOS) missions we completed at over a distance of 13 miles north of Reno, Nevada and the multiple aerial parachute package delivery missions performed were a first in the National Airspace System (NAS) under the NASA UTM.  Our Nevada NASA partners did an amazing job in extending the body of airspace management and sense and avoid knowledge under the UTM and across the UAS Industry.  The National Campaign data provided to NASA from our two-week operation will go a long way toward advancing the UTM for the FAA and the UAS Industry,” said Chris Walach, Director of the FAA-designated Nevada UAS Test Site.

“At AirMap, we consider UTM to be a critical ingredient for a thriving drone ecosystem. The TCL 2 trials demonstrate that technologies for geofencing, data exchange, and more can enable safe and sophisticated drone operations, even beyond line of sight. Along with NASA, the FAA, and NIAS we’re excited to show how UTM can chart a safe course for the drone ecosystem,” said Steve Willer, Business Development Manager for AirMap.

“Drone America is a proud participant in a Nevada Institute for Autonomous Systems (NIAS) led NASA Unmanned Traffic Management (UTM) program at the Reno Stead Airport.  The safe integration of Unmanned Aerial Systems (UAS) into the National Airspace System (NAS) is critical to the future of this industry.  Drone America is fortunate to call Nevada our home.  Working in a state that is very supportive and business friendly makes a tremendous difference to our future sustainability.  Our partnership with NIAS and NASA will not only contribute to successful testing, this partnership will pave the way for future generations to experience the true value of autonomous systems,” said Mike Richards, President and CEO.

NIAS was also supported by Del Air Tech and SensoFusion who provided UAS and drone detection UAS technologies, which were also tested during this NASA UTM TCL 2 Test.

“We have been designing, manufacturing, and operating UAVs in the civilian airspace for almost 10 years in 100 countries. This landmark agreement with NIAS, and the associated data collected for the UTM system designed by NASA at the Reno UAS Test Site will push our traffic management technology to a new level of precision and insight.  We are thrilled to collaborate with NIAS on solutions that represent a new era for the commercial UAV market and a better presence of Delair-Tech in the US,” said Benjamin Benharrosh Co-founder and Head of Delair Tech North America.

“We’re excited to be shaping the future of air traffic management as an official partner of the NIAS by providing our counter-UAS solution, AIRFENCE, in the ongoing NASA UTM project.  AIRFENCE is playing an active role in detecting, locating, and tracking UAS as part of the project, providing rich data to NASA as they develop their UTM system,” said Kaveh H. Mahdavi, Sensofusion VP of Operations.

“NASA is one of Nevada’s most valuable partners.  We appreciate the opportunity to support NASA’s UTM development.  It is truly cutting-edge technology and will be instrumental in integrating UAS into the national airspace,” said Tom Wilczek, Aerospace & Defense Industry Representative for the Nevada Governor’s Office of Economic Development.

Current testing of the UTM TCL 2 Test marks the second year in a row NASA has taken its UTM technologies on the road to further assess and refine their capabilities.  During April 2016, NASA and its partners tested TCL1, which involved line-of-sight operations, and then began the first phase of TCL2 demonstrations in October 2016.  Two more phases, TCL3 and TCL4, each progressively more complex and involving flying drones with specific tasks over increasingly populated areas are scheduled for 2018 and beyond.

About the Nevada Institute for Autonomous Systems (NIAS): The Nevada Institute for Autonomous Systems (NIAS) and FAA-designated Nevada Unmanned Aviation Test Site leads the growth of the Nevada Unmanned Aviation Systems (UAS) Industry through business teaming relationships, collaborating with primary research institutions on UAS research and development, and enhancing the Nevada UAS Industry knowledge base to attract new and permanent business and create jobs in the State of Nevada.   Learn more at www.nias-uas.com.

About AirMap: AirMap is the world’s leading airspace management platform for drones, supporting more than 100,000 drone flights per day. Millions of drones, hundreds of drone manufacturers and developers, and hundreds of airspace managers and stakeholders rely on AirMap’s airspace intelligence and services to fly safely and communicate with others in low-altitude airspace.  With solutions for Unmanned Traffic Management, geofencing, remote identification, deconfliction, and more, AirMap is helping to create the next frontier of flight. https://www.airmap.com/

About Carbon Autonomous: Carbon Autonomous produces unmanned systems enhanced by seamless data analysis and visualization systems, and is guided by a team of experts with decades of combined experience in related fields.  Unmanned systems designed for what you need.  Our initial product offering, the CA1, is an ultra-high endurance unmanned aerial vehicle, designed to stay aloft for continuous operation throughout a 12 hour duty day.  No toys, no gimmicks, just a rugged tool designed to get the job done.  http://www.carbonautonomous.com/

About Delair-Tech: Delair-Tech, a leader in professional UAVs, provides aerial-imagery-based data to help industries make informed decisions. Experts in both long-range UAV manufacturing and data processing, Delair-Tech delivers end-to-end solutions, from data acquisition to business analysis. Created in 2011, Delair-Tech is represented in more than 80 countries and has over 100 global employees with specialized solutions in various sectors, including: agriculture, geomatics, transport, electric power, oil and gas, mining, and security. In 2016, Delair-Tech is continuing to consolidate its position in the commercial UAS market by acquiring the UAS business of Trimble, Gatewing. Alongside its acquisition, Delair-Tech has signed strategical distribution agreements with Trimble. www.delair-tech.com/

About Drone America: Drone America strives to be one of the World’s Top Providers of Autonomous Unmanned Vehicles, high tech equipment and services. Our mission is to use UAS technologies as a means to survey, protect, and preserve human life and strategic resources around the Globe. For more information about Drone America please visit www.droneamerica.com/

About SensoFusion: Sensofusion’s most recent project is focused on BVLOS testing as a joint effort managed by the Nevada Institute for Autonomous Systems and NASA UTM, where Sensofusion is providing crucial “sense and avoid” data to their platform.  https://www.sensofusion.com/