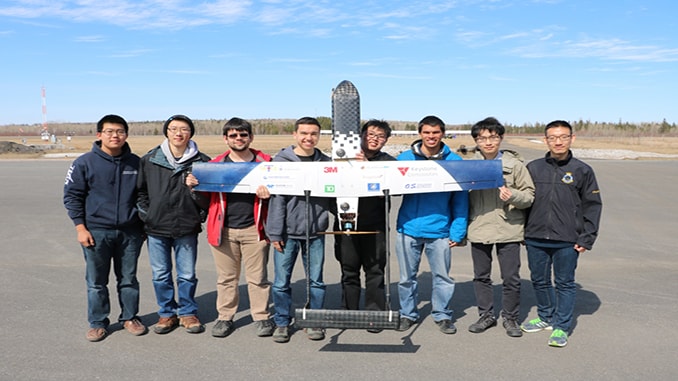 Unmanned Systems Canada is the largest annual UAV competition in Canada that features innovative designs in drone technology. This year, the goal for contestants was to locate and conduct a survey of the nests of three different species of goose in the Canadian wilderness, and use a drone to retrieve an egg from one of the nests in order to test for any contaminants in the environment, such as pesticides.

The teams had a 30- to 45- minute window to collect the egg.The UTAT designed two drones to complete the job. The first was a fixed-wing UAV called UT-X2B, which was responsible for conducting the census. The second was a quadcopter drone called UTX-D, which featured a manually controlled robotic arm used to collect the egg. Both vehicles used GPS devices to fly autonomously to specific locations, while using visual cameras to capture pictures of their targets.These drones differ in the way they generate force required to stay in the air.

A fixed-wing UAV is similar to an airplane in that it achieves this force by using forward airspeed. A quadcopter is a multirotor helicopter and generates this force with its four propellers spinning in different directions.Amidst the windy weather, expert piloting skills were needed to get the drones airborne and keep them from crashing.According to Rikky Duivenvoorden, a safety pilot and technical advisor for the UTAT’s UAV Division, retrieving the egg was “particularly difficult. We’ve had to drop things before, but picking something up added a completely new dimension.” None of the teams were able to complete this task in their initial run.On the second day of the competition, the teams were given another chance — this time, UAV was successful.

“We outfitted the quadcopter with a carbon fiber robotic arm for picking up the eggs. Essentially the quadcopter flew from our base to the location with the eggs, landed within reach of an egg, picked one up using the robotic arm and then flew back home,” says Chau. “To control the robotic arm, we mounted a small camera on top of the arm, which gives [first-person video feedback] to our pilot at the base. He uses this video feed to look around for eggs and pick them up.”The fixed-wing UT-X2B drone flew autonomously and conducted a search pattern with an onboard camera to detect and characterize geese over the survey area. The team then reported population statistics of the goose species and the geolocation of the nests.

The UTAT’s Aerial Robotics Division also competed, placing fourth in the overall competition with their vehicle, UT Skyhawk. Their drone’s design combined quadcopter and fixed-wing elements. The team also won the Judges’ Award for professionalism.New advancements in drone technology can revolutionize how we collect data from the environment, especially in remote areas.

Drones can be used to gather information from unsafe geographical landscapes inaccessible to people, to put out fires, or to help the rescue the wounded.Duivenvoorden suggests that it will soon be commonplace to have drones in the air. “From a technological standpoint, we’re basically there. From a regulatory standpoint, we have to share the airspace with manned aircraft, so it’s very important to make sure that we ensure safety for everyone,” he adds. “As autonomous systems like ours continue to improve, that will become easier to do.”