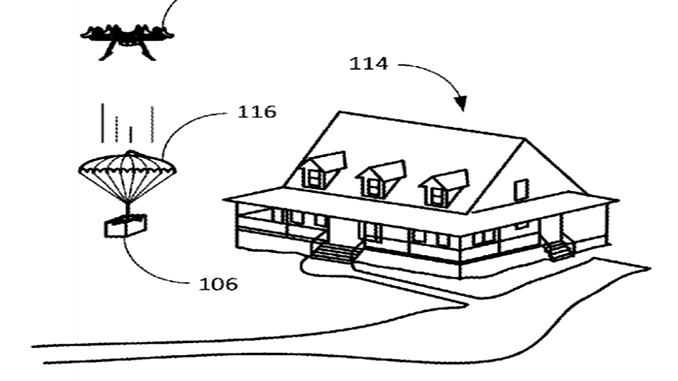 Amazon customers could someday be repeating this phrase as the online retail giant this morning received a patent for a shipping label with a built in parachute to help packages make a soft landing when dropped out of the air by drone or other airborne craft.

According to the newly issued patent from the U.S. Patent and Trademark Office, the parachute label could look and act just like any other shipping label, but underneath is a system of cords, a parachute, a breakaway cover and possibly a harness to keep everything in place. The package could also be loaded with sensors to make sure the package hits its landing zone and a shock absorber in case the cargo is coming in a little too hot.

Images in the patent file suggest that the parachute labels could be applied to every package, once drone delivery becomes a more common method for Amazon, and then later removed if a truck or other ground-based method makes more sense than drone delivery. The parachutes could be adorned with everything from bar codes and QR codes, to the delivery address, to coupons and more.

Parachutes could be of all different shapes and sizes and Amazon could apply multiple parachute labels to keep larger, heavier items from careening to the ground. Static lines would attach packages to drones. When it is time to deliver, the line pulls the shipping label off, opening up the parachute.

Amazon has been working on ways to deliver via the air for years, and a push for drone delivery has been a big part of it. Jon Hanlon, senior technical program manager for Prime Air, is listed as the inventor on the patent which Amazon applied for back in August 2015.

Amazon foreshadowed the possibility of parachuting packages as part of another wild idea, patented earlier this year: a system for ejecting the packages from drones while they’re in flight. A spring-loaded shooter, a drogue parachute or a set of actuators were all floated as options. The key is to push the package off the drone while it’s flying, with just enough forward force to turn a parabolic drop into a basically vertical descent.

Patent filings have revealed plenty of other eyebrow-raising plans that Amazon is looking at as part of its drone delivery plans. These ideas include drone deliveries from flying warehouses, or a system for connecting multiple drones to create a bigger, Lego-like (or Borg-like) super-drone.

As it piles up patents, Amazon is getting closer to making drone delivery a reality. The technology made its first semi-public U.S. delivery in March during Amazon’s MARS 2017 conference at a resort in Palm Springs, Calif. That followed the first Prime Air drone package delivery in December, in England. Amazon’s drone delivery technology also made an appearance in a Super Bowl ad.

No Replies to "Amazon Patents Shipping Label With Built-in Parachute"