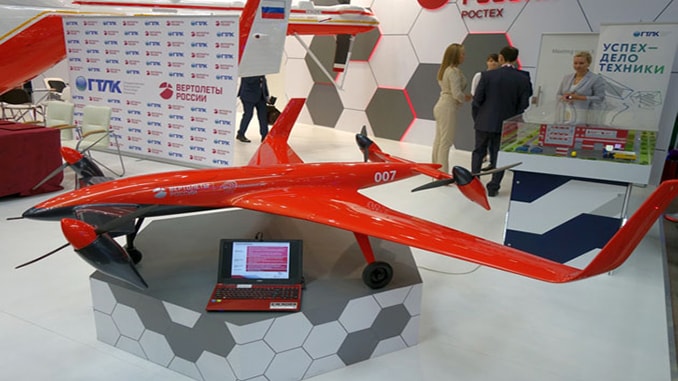 The prototype of the UAV was first shown at the Army-2016 International Military Technical Forum in September 2016, after subsequently the tiltrotor was retrofitted with a control system for rotary power units and tested at semi-simulation stands.

The Russian Helicopters stand at HeliRussia is featuring the prototype, which is currently undergoing flight tests. To date, flying and hovering tests in a copter mode have been fully completed, and automatic control systems are being tested at a stand for flights in the airplane mode. The first stage of the tests will be completed within two months.  As a result, the UAV will be finalized – it will be equipped with a hybrid power unit, which will increase its flight range and duration.

“In the future, the unmanned tiltrotor will be used for remote monitoring and diagnostics of various objects, for transporting small loads to hard-to-reach places, as well as for geodetic and cartographic work. Currently, negotiations are underway with operators of the Northern Sea Route, oil and gas pipelines and power lines. Moreover, the technical concept of the UAV was developed in coordination with these companies,” said the CEO of VR-Technologies Alexander Okhonko.

By the fourth quarter of 2017 the tiltrotor will enter the second stage of testing, during which it will be tested in various flight modes, weather conditions and target payload elements.  Mass production is tentatively scheduled for the end of 2018.

No Replies to "Russian Helicopters Showcases Unmanned Tiltrotor At HeliRussia-2017"