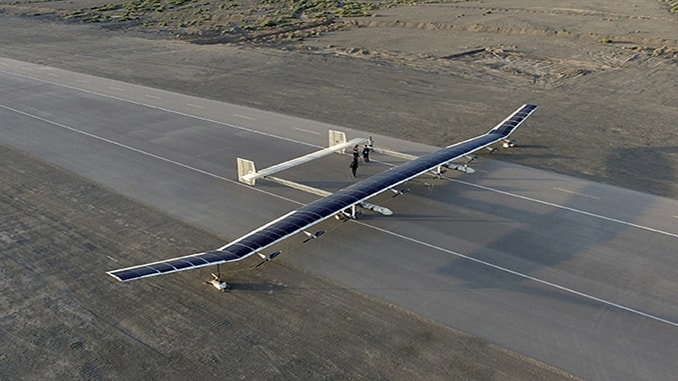 China’s largest and most advanced solar-powered unmanned aircraft has set a domestic record for flight ceiling by reaching an altitude of over 20,000 meters, according to its designer.

The Caihong, or Rainbow, solar-powered drone, developed by the China Academy of Aerospace Aerodynamics, set the record during a test flight last week at an unidentified airport in Northwest China. It flew at an altitude of 20,000 meters long enough for the flight to be classified as a success, Shi Wen, head of unmanned aircraft development at the academy, said in an exclusive interview on Thursday.

He said the drone took off in the morning and flew back to the airport late at night. It will take several years for designers and engineers to improve and test the aircraft before it is delivered to users.

The aircraft is able to fly above a large area and features flexibility and good economy. Future improvements will enable it to remain aloft several months or even several years. Potential buyers mainly will be government departments and companies involved in communications, internet, Earth observation, emergency response and marine survey and inspection, according to Shi.

He declined to reveal the size of the drone, but earlier reports said a similar type aircraft developed by his team was 14 m long with a 45 m wingspan.

The designer explained that normally, a fuel-powered military drone can fly to a maximum altitude of up to 8,000 m while a handful of top surveillance drones like the Northrop Grumman RQ-4 Global Hawk in the United States are capable of reaching altitudes of 18,000 m.

In the category of solar-powered drones, Chinese institutes have developed some experimental models, but they are smaller and technologically unsophisticated compared with the Caihong, and their highest operational altitudes are at thousands of meters, Shi said.

His comments were echoed by Wang Yangzhu, president of Beihang University’s Unmanned System Institute and a senior drone expert. Wang said Beihang University in Beijing, Nanjing University of Aeronautics and Astronautics in Jiangsu province and Northwestern Polytechnical University in Shaanxi province had made experimental, solar-powered drones to verify technologies and their types “could hardly fly any higher than 10,000 m”.

“Therefore, the Caihong has made a remarkable achievement,” Wang noted.

Shi said the higher a solar-powered drone can fly, the longer it is able to remain in the sky because there are no clouds 20,000 m above the ground and the airflow there is stable. Thus, the drone can fully use its solar cells to generate power. As long as the solar power system works well, the aircraft can stay in the air as long as the controllers wish.

Drones made by the China Academy of Aerospace Aerodynamics have been used in more than 10 foreign countries, according to the academy.