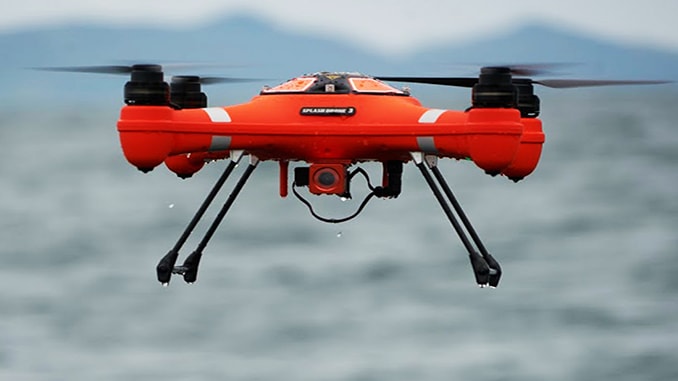 The vast majority of drone owners fear flying over water for obvious reasons. Viral videos of drones crashing over lakes and beaches are far too common these days, but those days are now over. That’s because SwellPro is introducing the new Splash Drone 3 AUTO and Fisherman editions. The only drone that is waterproof, can float in the water, is equipped with a 4K stabilized camera and Payload Release System that can deliver a life vest or bait for up to a kilometer away. The Splash Drone 3’s new flight controller has redundant safety features that allow it to automatically return to its take-off position at the flip of a switch or auto-land in case of low battery voltage, much more effectively than its predecessor. The Fisherman Edition comes with a Payload Release System that is geared towards fishermen, boaters and search and rescue personnel that want to deliver a life vest to a swimmer in distress or even bait to the desired location.

Both the Splash Drone 3 AUTO and Fisherman edition can fly in the rain, snow, land and float on water and see underwater while wirelessly transmitting the video signal back to the monitor on the newly designed remote control. The remote also vibrates to alert the drone pilot of any safety concerns like low battery levels or loss of navigation satellites. The 4K video camera on the Splash Drone 3 AUTO is mechanically stabilized and can take 14 megapixel still photos with its distortion-free lens. While the Payload Release System of the Fisherman has a fixed camera that can carry up to 2.5lbs pounds. Both the 4K camera gimbal or the Payload Release System can be interchangeable between the AUTO and the Fisherman Edition of the Splash Drone 3, but unlike the Fisherman Edition, the AUTO can also be flown from a mobile app that allows it to fly smart missions like Tap-To-Fly to location on the map, Follow-me Mode and Automatic Mission Plans.

“We’re very excited to launch our most advanced drone yet. With the release of the Splash Drone 3, drone pilots will be able to do what was virtually impossible before, get a video shot from under water and from the air in one flight. I’m proud of SwellPro’s innovation and how much we’ve advanced in the last two years,” said Eric Hu, CEO of SwellPro, the company that manufactures the Splash Drone in Shenzhen China.

“Two years ago creating a waterproof drone was only a dream, today I’m delighted to announce that this dream has become a reality. We’re reimagining a new flight experience by getting rid of the fear of flying over water,” Said Alex Rodriguez, CEO and drone designer at Urban Drones, a drone technology company based in South Florida and the distributor of the Splash Drone in the Americas and Canada.

The Splash Drone 3 AUTO and Fisherman has been launched on Kickstarter, the most popular crowdfunding platform in the world, on May 23, 2017; and can be found at https://www.kickstarter.com/projects/splashdrone/splash-drone-3-a-fully-waterproof-drone-that-float – Delivery to early backers starts in early late July, 2017. Boaters, drone enthusiasts and water sports aficionados that take advantage of the Splash Drone’s Kickstarter campaign, will enjoy a much lower price and early delivery before it’s available for retail starting at $1399 for the Fisherman and $1699 for the AUTO.