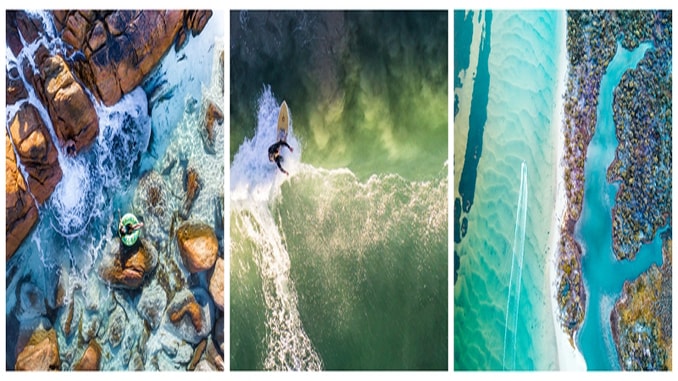 Run in partnership with DJI and Tourism Australia, the SkyPixel Australia from Above aerial photography contest received over 6,000 entries, including photos from the inspiring expanse of Australia’s pristine white beaches to the raw power of its rich, red outback.

“The amazing work from participants really shows the growing interest around this new photographic artform and the potential of aerial technology” said Danny Zheng, DJI Vice President of Marketing. “We were thrilled to see so many quality entries, from local photographers as well as those outside the country who captured Australia’s extraordinary beauty in an entirely new way.”

The second and third prize winners were skysnaps with a photo titled Sea of Green respectively, one showing a breaking wave at Secret Harbour, south of Perth, and Yantastic for Rigby Island, and the other a top-down shot of a boat navigating its way through Rigby Island in Victoria. These winners will take home various DJI, SanDisk, Adobe and Epson products. Separately, 10 additional entries were shortlisted by SkyPixel users and awarded with an Osmo Mobile Silver, SanDisk MicroSD and Portable SSD.

Tourism Australia’s Chief Marketing Officer, Lisa Ronson, was blown away by the quantity and the quality of entries. “There are some amazingly talented photographers out there who are using drone technology to capture some breath-taking images of Australia. Drone-facilitated photography as well as other new technologies such as VR and 360 are enabling us to tell our story in ways which were just not possible a few years ago. It’s very exciting for our industry and will, I’m sure, provide inspiration to many Australian tourism operators as they look at new and engaging ways to promote their businesses,” she said.

All the winning photos can be viewed here: www.skypixel.com/events/australia

DJI Launches Spark, The Easy And Fun Camera Drone For Everyone