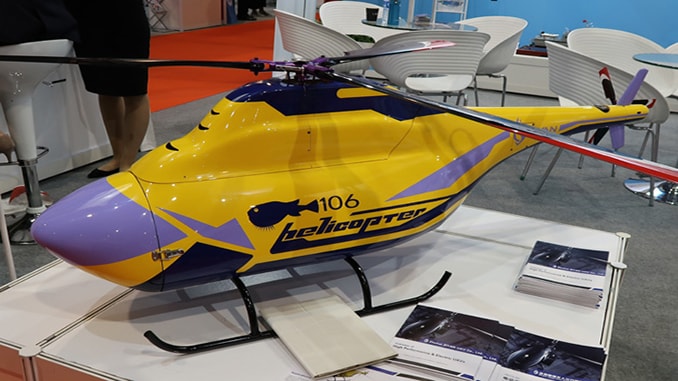 The Ziyan Unmanned Aerial Vehicle Company, based in Zhuhai, China, promoted three new rotorcraft UAVs at IMDEX Asia 2017 in Singapore. Only one of the types, the Blowfish, was displayed, but Ziyan’s brochure included a military rotorcraft UAV, dubbed the Infiltrator Surveillance and Strike Aircraft, capable of carrying air-to-ground missiles.

The Infiltrator configuration is the same as a standard helicopter and can be fitted with four air-to-ground missiles, said a company representative, although the photograph in the brochure showed only two.

The official showed Shephard a video on his mobile phone of the Infiltrator firing missiles during a flight test.
The UAV is also capable of electronic reconnaissance and surveillance, with a maximum payload of 10kg. It has an empty weight of 8.6kg, raising questions about the type and number of missiles it could actually carry in real combat.

The only rotorcraft UAV actually displayed by Ziyan at IMDEX was the Blowfish general transport aircraft, used to either airdrop supplies or land for off-loading by ground personnel. It can survey forests or pipelines with optional sensors and cameras within a 15kg maximum payload limit. It has an empty weight of 9.5kg. Maximum speed is 145km/h, and it has a 50-minute endurance and 5,100m maximum altitude.

The other UAV being promoted, but not on display, was the Ranger tactical surveillance helicopter. It has a dual role of commercial and paramilitary surveillance. Though it can be used for such things as pipeline surveys, it can also be used for public security patrols, including upper air surveillance.

The Ranger has an empty weight of 8.8kg and it can carry a variety of sensors weighing up to 7kg. It has a maximum flight speed of 160km/h, 55-minute endurance, and 5,100m maximum altitude.

Knowledge Base Presented By Altavian "Why Composite Materials Matter For Drones"