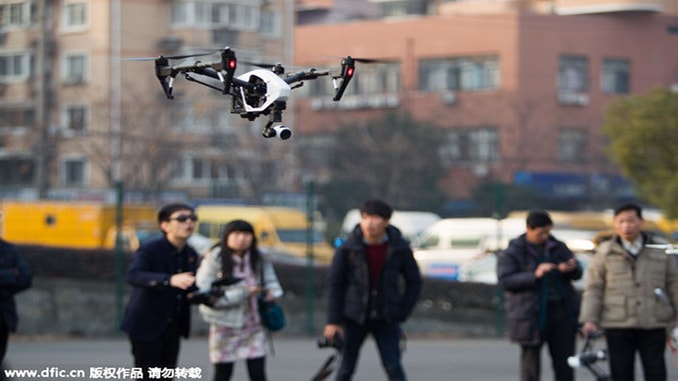 If you pilot a drone heavier than 250 grams (0.55 pound) in China, you’ll have to register with authorities. That’s due to a new registration policy that aims to address a recent spate of drone intrusions by amateur pilots.

Pilots will have to register their real names with the Civil Aviation Administration of China (CAAC) online from June 1, according to state-owned Xinhua.

China’s aviation regulators are also seeking to create data-sharing platforms and platforms to verify registrations — which will be connected to apps that control drones, Xinhua reported.

“We need to understand complicated situations when it comes to managing drones,” Wang Zhiqing, a CAAC deputy administrator, told Xinhua. Monitoring drones can be a huge challenge given how cheap drones are and how difficult it was to establish a registration system, he added.

The CAAC has considered implementing the registration system since last year, according to various local reports. It had previously required operators of drones that are more than 7kg (15 pounds) to license their drones, according to a draft law issued in 2015.

The rules have yet to become binding — but they stipulate that drones must keep out of restricted airspace and follow rules set by the military and government. Drones must also have their weight, maximum altitude, and place of manufacture registered before taking off.

Analysts say that the rules have been a long time coming, according to the South China Morning Post.

“Real-name registration will guide the drone industry in China towards a healthy development,” Sophie Pan, an analyst at IDC China, a market research firm, told the South China Morning Post.

The market for drones in China is expected to reach 7.5 billion yuan ($10.9 million) by 2025, according to iResearch. Still, the policy is expected to dampen drone sales.

Nearly all drones weigh more than 250g, which would mean all drones in the China market would have to go through registration, Pan said.