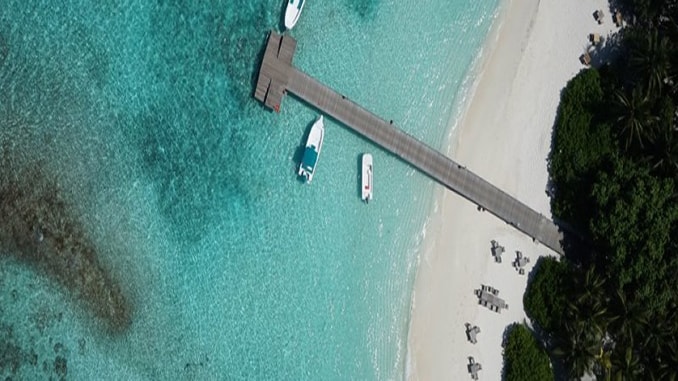 Aeromapper Talon Surveys An Entire Island In A Single Flight

On December of 2016 Aeromao Inc. in collaboration with Foresight Surveyors completed a full photogrammetric survey mission with an Aeromapper Talon over one of the most unique and exotic islands in the Maldives, surveying a total area of approximately 251 acres or 1 Sq. Km. at a GSD of 2cm/pixel. The UAV flew at a cruise altitude of 100 m AGL and collected 1422 photos with an amazing level of detail. A DSM, orthophoto and point cloud were generated using Pix4DMapper. Despite the 2-hour flight endurance capability of the Aeromapper Talon, the mission was successfully completed in only 45 minutes. The UAV flew at a maximum distance from the ground control of 2km.

The UAV flew flawlessly and was launched and recovered via parachute from a nearby island approximately 1 km away, due to the limited space available for takeoff and landing on the target island.

The Aeromapper Talon was not equipped with PPK GNSS system, so 5 GCS points were taken on the island which resulted in a horizontal accuracy of 4.8cm

The mission resulted so successfully that the crew had plenty of time to go snorkeling around the island while the computers processed all the data.

The Aeromapper Talon utilized is owned by Foresight Surveyors purchased by the year 2014. An upgrade and service was performed to get the UAV up to date prior to the flights over the island.

The purpose of the survey was to generate an orthophoto to trace the As-built for future developments taking place in the island. Thanks for the data acquired, the client received an up-to-date high-resolution property map which was easier to be used by the project department and decision makers. As well the othophoto was useful for their environmental monitoring purposes and biodiversity mapping.

Foresight surveyor is the first company to introduce unmanned aerial vehicle mapping to the Maldives. Foresight Surveyors decided on the Aeromapper Talon because of its ease use, dependability, and affordability.

The Maldives consists of 1,192 coral islands grouped in a double chain of 26 atolls, along with the north-south direction, spread over roughly 90,000 square kilometers (35,000 sq mi), making this one of the world’s most dispersed countries. It lies between latitudes 1°S and 8°N, and longitudes 72° and 74°E. The atolls are composed of live coral reefs and sand bars, situated atop a submarine ridge 960 kilometers (600 mi) long that rises abruptly from the depths of the Indian Ocean and runs north to south.

Maldives is the lowest country in the world, with maximum and average natural ground levels of only 2.4 meters (7 ft 10 in) and 1.5 meters (4 ft 11 in) above sea level, respectively. In areas where construction exists, however, this has been increased to several meters.

With exports to more than 45 countries in less than 4 years after founding, Aeromao Inc. offers a line of products that adapt very quickly to market demands and to unique client’s applications, where no other UAV manufacturer goes. From wildlife monitoring in the Artic to water quality monitoring in Saskatchewan, to urban mapping in Thailand, the Aeromappers are currently being used by private companies, research organizations, universities and government agencies all over the globe for a wide variety of applications.