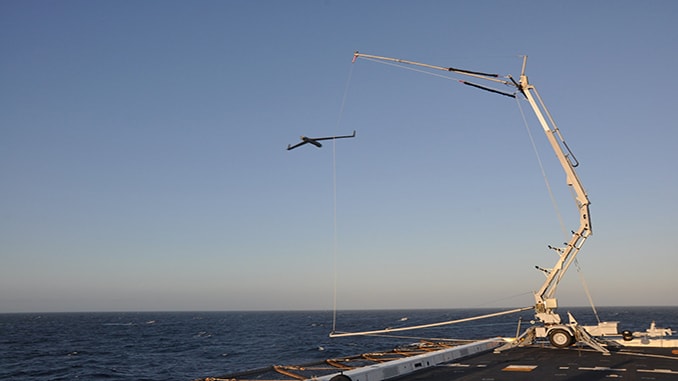 Among its many pioneering moments, ScanEagle was the first unmanned aircraft to operate from a U.S. Navy Destroyer, the first to perform an FAA-approved commercial beyond visual line of sight flight in the United States’ National Airspace System and the first to be flown by students pursuing America’s first undergraduate degree in Unmanned Aircraft Systems Operations.

Now the aircraft joins an impressive collection of historical artifacts and contemporary objects at the Intrepid Sea, Air & Space Museum in Manhattan. Drones: Is the Sky the Limit? is a temporary exhibit that tells the story of drones, from the earliest attempts to employ unmanned flying machines to the advanced systems of the 21st century and beyond. In addition to hands-on opportunities to fly drones and experience the thrill of drone racing, visitors will interact with some of the less conventional ways unmanned aircraft are making their mark on pop culture, including the flying lamp shape drone from Cirque du Soleil’s short film Sparked.

The exhibit also explores the potential for drones in commercial and civil applications including infrastructure surveillance and precision agriculture, as well as conservation and humanitarian efforts. In service with global militaries since 2004, one of ScanEagle’s earliest environmental operations took place in 2010, when Insitu collaborated with the Australian Marine Mammal Centre and researchers from Murdoch University to monitor marine mammals off the Australian coast. Since that time, the aircraft has provided aerial surveillance and information for wildfire, railway, wellhead and pipeline monitoring, as well as search and rescue operations and other applications.

“At a time when drone technology is advancing faster than ever, we take great pride in the pioneering work Insitu has done to help shape this path,” said Ryan M. Hartman, Insitu president and CEO. “We are honored to have ScanEagle included in an exhibit that celebrates the limitless nature of unmanned aviation.”

The exhibit runs through December 3, 2017, and is free with museum admission.

No Replies to "Insitu ScanEagle Joins "Drones: Is the Sky the Limit?" Exhibit at NYC's Intrepid Museum"