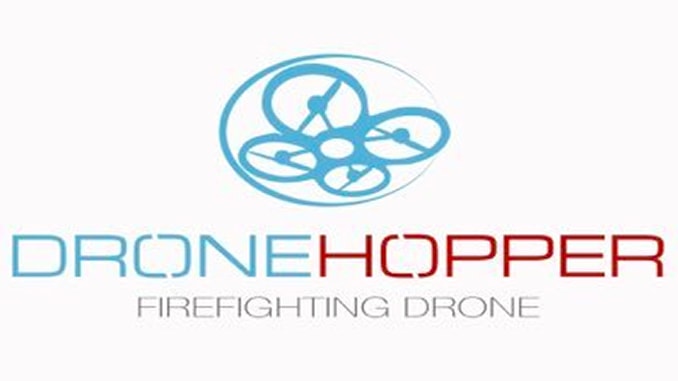 DRONE HOPPER is presenting its designs for a first of its kind heavy-duty firefighting drone at the XPonential trade show in Dallas. The drone offers safety, flexibility, and efficiency over traditional fire suppression technology. A fully functioning prototype will be available for demonstration to American rescue services starting July 2017. The drone is expected to be launched on the market in the Fall of 2018. 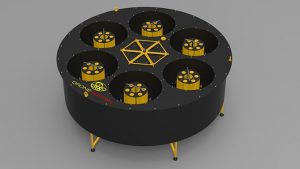 The drone has a diameter of 160 centimeters (63 inches) and is 50 centimeter (20 inches) high. It will be fueled by gasoline to allow for maximum autonomy and ease of use. Its design offers a high-tech solution to firefighting that offers safety, flexibility, and efficiency.

Wildfires have caused on average 16 casualties per year in the last 10 years in the United States alone. Unmanned drones need to make those losses a thing of the past.

The systems of the DRONE HOPPER firefighting platform will incorporate thermographic cameras and navigation systems that permit real-time information on the most advantageous point for the fire extinction and terrain and atmospheric conditions. Thanks to this advanced instrumentation, the drones can operate 24/7 in a seamlessly coordinated manner.

Although the volume of water the DRONE HOPPER carries is about one-tenth of the mass of water that a hydroplane can carry, the price of the drone is one-tenth as well, allowing the rescue services to easily acquire enough drones to match the productivity of the plane while ensuring a greater degree of safety and pinpoint accuracy.

Each drone has a maximum capacity of 300 liters (79 gallons) of water. The water is nebulized directly above the seat of fire for its extinction. The design makes use of the high-speed air generated by the drone propellers to perform this process. Finally, each drone includes a magnetic system to control the nebulization of water in order to use the appropriate amount of water mist for each specific type of fire.

Release from air and land

The drone can be adapted to different aircraft models to release drones at a certain altitude above the fire. The drones can also be transported by land and take off from a location close to the fire to comply with existing regulations for unmanned vehicles.

DRONE HOPPER has received funding through both the Spanish Ministry of Industry and the Horizon 2020 program of the European Union. The funding from the latter was made available because of the contribution of efficient firefighting to environmental protection.

“A game changer for firefighting services”

“On average, more than 100,000 wildfires clear 4 million to 5 million acres (1.6 million to 2 million hectares) of land in the United States every year, mobilizing and putting at risk firefighters. We need to be more efficient than that and DRONE HOPPER is poised to be the game changer that the rescue services have been waiting for,” says Pablo Flores, CEO of DRONE HOPPER. “We are close to launching our prototype. In the meantime, requests are already coming in from the Americas and Southern Europe to see it at work.”