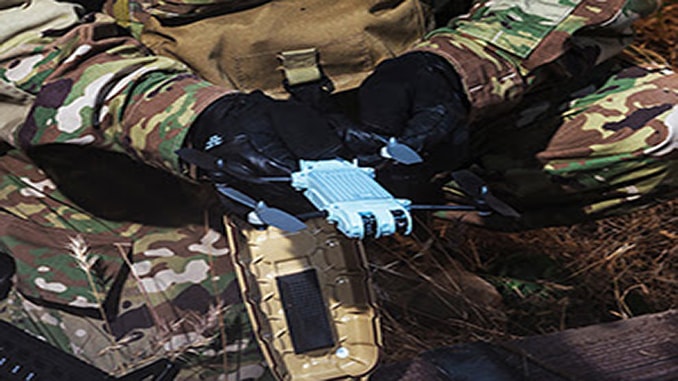 “Snipe enables operators to spring into action quickly,” Flittie said. “No assembly is required for the five-ounce (140-gram) nano-UAS, which is designed to be worn by its operator so it can be deployed in less than a minute.”

With its quiet electric motors, flight speeds exceeding 20 mph and more than one-kilometer range, Snipe is difficult to detect in operating environments with even minimal ambient noise. Its rechargeable batteries power approximately 15 minutes of flight time. Despite its small size, the durable nano-UAS is capable of operating under challenging environmental conditions – including winds of 15+ mph with gusts up to 20 mph

“While Snipe’s stealthiness makes it ideally suited for military applications, it’s an invaluable asset for anyone needing a ‘Class 0’ UAS to support their missions,” Flittie said.

Snipe is controlled using an intuitive app on a standard, ruggedized (MIL-STD 810) touch screen controller with intuitive user interface and automated operation for ease of use.  Other critical functions include Snipe’s ability to return to its operator automatically if it loses its radio link.

Snipe benefits from advances in nano unmanned technology achieved by the company in its development of the internationally recognized Nano Hummingbird.  “The Nano Hummingbird, the world’s first unmanned aircraft capable of propulsion and control using two flapping wings, is an example of how our breakthrough innovation has spawned a valuable new capability in Snipe that now will help our customers proceed with certainty,” added Flittie.