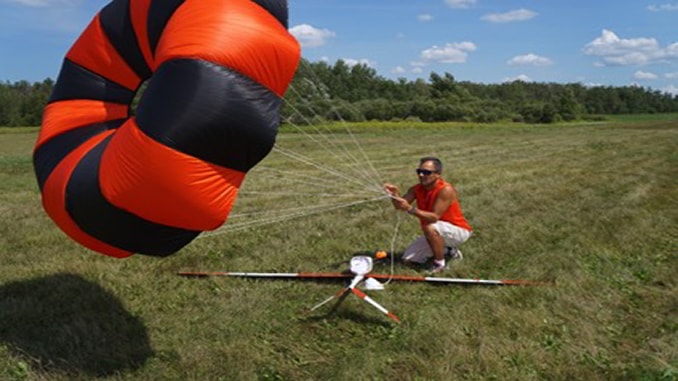 With new and stricter drone safety regulations being implemented around the world much of the sUAS market is now waking up to the idea that safety does matter. Aeromao has been on board since 2011, much earlier than most UAV companies.

With new and stricter drone safety regulations being implemented around the world much of the sUAS market is now waking up to the idea that safety does matter. Aeromao has been on board since 2011, much earlier than most UAV companies. Since then their entire product line has featured Fruity Chutes parachutes both as primary and emergency recovery. Currently, Aeromao has three Aeromapper UAS models that all use parachute recovery. Over time Aeromao has purchased hundreds of  Fruity Chutes recovery systems and is now reaping the rewards of their safety first culture by having a product that its customers feel is safe and easy to use.

Fruity Chutes never stops growing and evolving their product line. When Fruity Chutes opened its doors in 2007 it started by manufacturing parachutes for the amateur and high power rocketry community, and other academic research projects. In 2011 when Fruity Chutes realized that the UAS market was going to be the largest segment of their sales they introduced the Iris Ultra parachute. A new design that was more efficient, weighed 35% less, and took up 35% less space and had all of the same performance and strength qualities as Fruity Chutes’ first parachute, the classic elliptical.

Since Aeromao bought its first parachute from Fruity Chutes in December 2011, their customers have found Fruity Chutes parachutes to be a fantastic standard feature of the Aeromapper! Mauricio Ortiz Buitrag, of Aeromao, tells Fruity Chutes “Our customers love it! They are able to operate pretty much everywhere: hand launch and vertical landing. Even with the increase in offerings of VTOL drones out there, nothing beats the simplicity and weight savings of a parachute landing.” Through Aeromao’s tests and Aeromao’s customers, real life missions Fruity Chutes parachutes have been proven to be tough and sturdy. Buitrago boasts that they are “perfectly made and have heard zero complaints. We never get to the point of damaging a single chute. They are super strong. We have even landed in pointy tree branches in the winter (no leaves in the trees) in very strong winds. We had to pull the aircraft from the tree by pulling the chute lines. We were expecting the parachute fabric to rip. Instead, the branches broke off but the parachute was intact.”

Gene says “Mauricio was always challenging us to make our parachutes lighter weight and smaller.  It was customers like Aeromao that helped focus our product line for the UAS market.” With the Iris Ultra annular canopy design proving itself as a highly efficient canopy the next place was to save weight by using lighter weight shroud lines.  Gene says “We sourced 350# Kevlar lines used for high performance kites for the first version.  This took another 45% of weight out of the parachute.”  Aeromao once again was the first customer to use the new Iris Ultra Compact parachutes purchasing the new IFC-60-K parachute in November 2012. Gene says “Aeromao went on to buy all of the new Iris chutes over the next few months.”

In 2013 Fruity Chutes had grown large enough that they were able to get the attention of the US textiles and cordage manufacturers. According to Gene, at this time, “we had our own custom 400# Spectra cordage made for us for our shroud lines.  This resulted in a huge leap in the quality and an even more compact and lightweight product.” 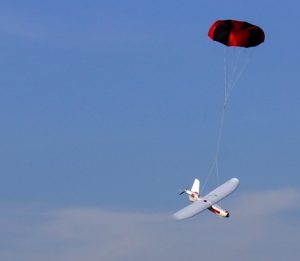 Since the introduction of the compact Iris Ultra parachutes, Aeromao has purchased many dozens of the chutes, and at the same time has been working on multiple new UAS product lines. Currently, Aeromao is developing a new and smaller consumer Aeromapper UAV, that will of course have a parachute landing system. It is Fruity Chutes hope that all UAS manufacturers will follow in Aeromao’s foot steps to include parachute recovery. Fruity Chutes, the parachute maker with the fun name, hopes that those of the UAS community who have not yet realized the vital importance of drone recovery will see the importance in protecting the people that they love and the infrastructure of their community.

Please visit the Aeromao Website for more information on these awesome products.

No Replies to "Aeromao: Pioneer in Parachute Recovery Integration"