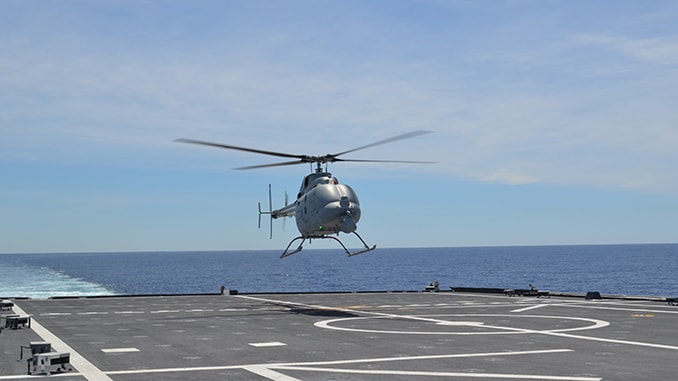 Northrop Grumman has been awarded a contract for $36.8 million to integrate radar systems on the MQ-8C Fire Scout drone helicopter. The pre-existing contract will include software updates, testing programs, and installation and support systems.

The work will be done primarily in Rancho Bernardo, Calif, and Edinburgh, Scotland. The program is expected to be completed by May 2020. Research and development funds previously allocated for Fiscal 2016 will include $11.8 million set to expire at the end of the fiscal year.

The Fire Scout and its variants are semi-autonomous drones designed for reconnaissance, surveillance, and target designation. It has been deployed to Afghanistan to help in counter-improvised explosive device operations. The smaller MQ-8B variant is deployed on smaller vessels like the Littoral Combat Ship.

The Fire Scout is based on the civilian Bell 407 helicopter, of which over 1600 have been built and has over 4 million hours of flight time. It can set down on any naval or land-based landing zone.

It includes a sophisticated radar and sensor system. One of its more unique features is the ability to land autonomously on command, without direct human control. It also has the ability to carry a sea mine detection system. It has a range of nearly 600 miles and can fly to up to 12,500 feet. It can be armed with Hellfire and Viper Strike Missiles, and several other weapons systems.

The United Kingdom has contributed to the system for their own use. Further upgrades with greater payload capacity and range are expected to be developed in the future.