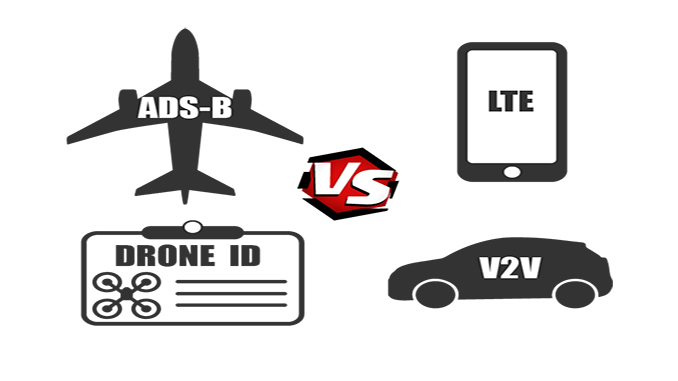 Knowledge Base Presented By uAvionix “The Battle For Drone Tracking Technology”

There has been a lot of discussion in the past couple of years about just what the right technology is for tracking the swarms of drones coming our way in the next decade.  Because uAvionix is a communications, navigation, and surveillance (CNS) company focused almost solely in the drone industry – we are wrapped right up in the middle of the debate.  There are a lot of opinions on the subject, for sure – and like many debates in this day an age – you tend to hear a lot of negatives as to why this technology or that one won’t work:

“Do you really want to trust your navigation to LTE?  What would happen if the call gets dropped?”

But behind all of that naysaying is a common core concept that is agreed to almost so universally that it isn’t really debated at all – that drones DO need to be tracked and identified electronically.

There is a fundamental agreement that drones will need to be “cooperative” – to borrow a term from manned aviation.  A cooperative aircraft has a transponder onboard (either Mode A/C/S or ADS-B) that allows the aircraft to be seen by other aircraft or Air Traffic Control (ATC).

In the drone industry – the debate is really on what that “transponder” should be.  For the rest of this article, I’ll try to articulate the four primary options being discussed and the pros and cons of each.  And here is a little foreshadowing – they serve different purposes and aren’t really in all-out competition at all.  I’m going to rank-order these from highest to lowest Technology Readiness Level (TRL) for the specific application we’re discussing here.

ADS-B derives its strength from its inherent compatibility with a large and growing population of manned aircraft worldwide. ADS-B is an international standard and is being adopted across the globe for the specific purpose of surveillance and see and avoid functionality.  For Detect and Avoid (DAA) applications, drones need to be able to detect nearby manned aircraft – and this is easily done if the manned aircraft have ADS-B on board.  But almost more importantly, ADS-B has the ability to allow the manned aircraft to electronically “see” the drone – right in their cockpit – with equipment they already have.  ADS-B’s TRL is highest among the choices because it was designed for aviation, is an existing standard, and is in widespread and ever increasing use, and through the efforts of uAvionix – is now an affordable and size appropriate solution for drones.

The arguments against ADS-B are focused on both spectral capacity and pilot or ATC “overload” associated with too much information on cockpit or ATC displays.  We’ve addressed both of these arguments pretty specifically in a previous article – but to summarize – we envision a 3 step approach to prevent those concerns from happening:

In summary, we like to think of ADS-B not as a “tracking” or surveillance technology for drones as it is for manned aircraft – but as a safety technology that truly integrates the airspace and keeps all users a bit more safe.

LTE or its successor “5G” is often thought of as the next “no brainer” technology for tracking drones (as well as other functions such as command and control (C2) or payload communications) – and for good reasons.  Significant infrastructure is already in place – the Internet of Things (IoT) is happening, and there is significant research and commercial development ongoing to leverage the technology for UTM and fleet management systems.  LTE’s TRL is high, but not as high as ADS-B because some fairly significant adaptations need to take place to adapt it for aviation purposes.

What about those dropped calls?  The answer is really dependent upon whether the application of LTE for tracking purposes is really safety critical, or informational only.  If the signal is dropped, but enough automation exists in the aircraft to re-connect – and other safety systems are onboard to prevent collisions – maybe it’s not much more than a few moments of elevated stress or annoyance for the operator.  But, if LTE is a critical component of an overall safety solution – there is definitely some work to do there to make the solution more robust.

There is also the issue of “roaming” – or switching from one carrier to the next.  One thing we’ve learned is that the certification process for operating on one network to the next is both non-trivial and non-harmonized.  Therefore a device manufacturer would have to invest significantly to ensure operation on all available carriers’ networks.    On top of that, there are restrictions on which channels may be used in airborne applications and the fact that the infrastructure’s antennas are focused downward mean that there is inherent altitude limit to overcome.

However, I have no doubt that the major network carriers will solve the issues with a lot of investment.  There is certainly the business case and incentive to do so – after all – your drone data plan dollars are at stake – which is another con in my book – you’ll be paying recurring fees for the airtime your drone uses.  If you were to ask me at the moment –  LTE/5G will ultimately be a dominant player in tracking and payload communications technology – but it has a long way to go before it can be used as a safety critical system like DAA or C2.

V2V has been an active topic within the NASA UTM program over the past year.  At a high level, it describes a mechanism for drone to drone communications.  The V2V concept seems to be just a little bit more than pure surveillance in terms of an envisioned capability to communicate intent, flight plans, or other UTM like data.

Drone 1: “Hey, our flight paths look like they are going to intersect in a bit – but it looks like you are going to turn south in about 100m so there’s no problem, correct?

Sounds great, right?  Yet, we have a long way to go before we get there.  This implies a pretty high level of automation and intelligence not only of the V2V system but of the underlying autopilot and UTM system it is connected to.  V2V’s TRL is slightly higher than the last place RID because there is a possible starting point in the automobile industry.  Dedicated Short Range Communications (DSRC) is a DOT research topic and is touted as “the future of safer driving.  The cross-modal program is conducting research using DSRC to ensure safe, interoperable connectivity to help prevent vehicular crashes of all types and to enhance mobility and environmental benefits across all transportation system modes.”  Sounds like with some adaptation it could fit the bill – but research in this area for drones is just getting started.

V2V doesn’t exist, and it probably can’t exist until UTM exists with some maturity for it to derive its knowledge base from.

The newest technology to the debate – the RID topic is focused on tracking and identifying drones – but for a different purpose – security.  Before drones can operate over people or BVLOS – how are authorities supposed to know who is allowed to do so when they encounter a situation?  RID’s TRL is lowest and there really aren’t any pros and cons to list here because the technology doesn’t exist other than in about 40 different concepts.  We’ve written a previous article on the subject and submitted a white paper in response to the FAA’s call for papers through AUVSI (with 39 others).  We even took a stab at defining what the requirements for such a system might be – since that in itself is open for discussion.  For this one, we just need to wait to see what the FAA’s newly announced Aviation Rulemaking Committee (ARC) will come up with.

So, Who Wins the Battle?

We started off pitting these 4 technologies against one another, but in the end, they all serve different purposes and it isn’t really fair to call a winner just yet.

While it is impossible to call the ultimate winner, there is a clear winner when it comes to the technology that is operational and available today with the highest TRL.  We are in a situation where we cannot afford 5 years or more of the traditional standards development and R&D timelines that will be associated with maturing LTE, V2V, and RID to what will likely become global standards (maybe make that 10 years).  There is only one clear choice when it comes to what can be done today to make the skies safer, to prevent near misses or worse.  It simply has to be ADS-B – at least as a stop-gap technology until something more tailored comes along.

As pilots ourselves at uAvionix – we are really passionate about the safety benefits that ADS-B can bring to a fully cooperative airspace – but as engineers, we understand the limitations that come along with that vision.  The needle is thread-able and a balance can be stricken to avoid a catastrophe.  There is no doubt that LTE/5G, V2V, and RID will play a role in CNS for drones – but those options are years away from becoming industry standards, and none of them will let a nearby manned aircraft know the drone is in the area the way ADS-B will today.