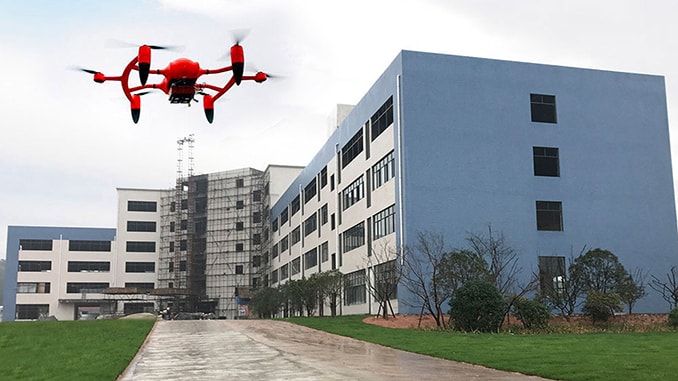 The Feria Aeroespacial México 2017(FAMEX 2017) kicks off at Mexico City on 26 April. FAMEX 2017 is a commercial activity in the field of civil and military, aerospace, aeronautics, defense, and security as well as in education, which is held from 26 to 29 April 2017, in the Base Aérea Militar No. 1, in Santa Lucía, Zumpango, México.

As an innovative UAS solution provider for industrial applications, MMC launched the world’s first hydrogen-powered UAS – HyDrone 1800 in April 2016, which has drawn a lot of attentions from all over the world. This year at FAMEX, MMC introduces its new technology of hydrogen UAS with upgraded specifications to meet higher standards in professional applications.

This advanced product was also shown at IDEX 2017 in Abu Dhabi February this year, which turned out to be a huge success and attracted a constant stream of visitors.

MMC HyDrone 1800 was designed for users in longer distance and wider coverage conditions,
The HyDrone 1800 can be utilized in aerial surveillance, reconnaissance, security control, emergency reaction, damage assessment, and other tasks depend on the payload it carries. The light weigh body offers flexible and efficient operation and maintenance during any task. And the cutting-edge hydrogen fuel cell enables it with up to 4-hour endurance. With maximum wind resistance of 10m/s, rain-proof, high heat-proof carbon fiber fuselage and a double-backup flight control system, this drone can be used in harsh weathers under very stable flight attitude. Meanwhile, with a patented “plug-and-play” mechanism interface, more than hundreds of payloads that under 5 kg could be attached to the platform for various purpose.

The hydrogen fuel cell technology is a breakthrough innovation for drones. Tremendous effort has been put into R&D in the company to solve the technical difficulties instability, endurance, fuel cell safety issue, compatibility and other problems the system might have during the flight. Thousands of critical tests have been made to prove and improve the performance and functions of HyDrone 1800, for example, operation temperature test, pressure test and flight altitude test and so on, to make it a real product ready for market.

“This technology is a new step forward from concept into real applications,” says MMC’s founder Lu Zhi Hui, “It’s safe, it’s effective, it’s proven, and the endurance is unmatched by any other powered multi-rotor UAS in this time.”
About MMC – Founded in 2009, MicroMultiCopter (MMC) is a leading manufacturer of multi-rotors UAS for commercial and industrial applications. MMC is focusing on enhancing R&D ability, productivity, work safety and efficiency. In April 2016, MMC launched the first commercial hydrogen-powered hexa-UAS, makes it a global leader in this area.

To learn more about MMC and the HyDrone 1800, please visit  Mmcuav.com