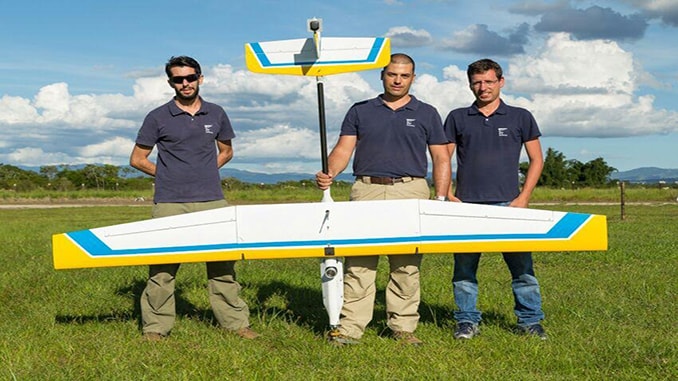 Brazilian  developer and manufacturer of UAVs launches an integrated pest control solution in an international agribusiness fair. Easy to use, economically sustainable and ecologically responsible, the innovation comes to the market to change the landscape of technologies offered for delivering targeted payload to the agribusiness.

The FT BIOFLY®. The technology solution to be presented to the agribusiness market brings the most advanced UAV systems that can estimate, monitor and deliver targeted biological agents to control crop diseases and pests, generating greater production outputs, reducing costs, maximizing yields and profits, and increasing safety.

Following a world trend in the agribusiness sector, the supply of technology for collecting and analyzing data is rapidly growing in Brazil. However, existing products and services are insufficient and still do not meet full market potential. The new FT BIOFLY® comes to meet this challenge in an increasingly demanding market that seeks effective and economically viable solutions for greater production outputs and better decisions in agricultural fields. By integrating the information provided by various platforms available in the market today, FT BIOFLY® sets a new paradigm in the services offered to the agribusiness sector since it allows management decisions to be driven by accurate and reliable data.

By acquiring the solution presented, farmers will have at their disposal a service offering high-quality precision data at a low cost. FT BIOFLY® causes no harm to the environment and does not require additional labor in field operations. The company brings to the market two advanced UAV systems, FT-100 and FT-100 FH, which now include a biological agent disperser, embedded sensors, and operation and maintenance aircraft teams. Controlled by tablets or laptops, the UAVs take off with a predefined route in the target area, returning to the base as soon as the work is completed. The simplicity of FT BIOFLY® can benefit small, medium and large producers.

Nei Brasil, FT SISTEMAS’s CEO, believes that FT BIOFLY® will be easily absorbed by the market. “This is because ease of use, reliability, cost and operational efficiency make the solution very competitive. We expect the direct consequence to be lower costs and larger crop yields.”

The UAVs 100
The FT BIOFLY® offer to be presented to the agribusiness will utilize two UAVs of the 100 Family: the FT-100, a fixed wing aircraft already known in the market, and the newest 100-FH unmanned helicopter. One of the main characteristics of the new UAV is the intermesh rotors configuration. Among the differentials of the UAVs 100 are better autonomy and endurance that respond to field situations with specific demands for greater versatility and easy-to-operate features. Both systems can take off from anywhere in the field.

To stay closer to its customers, in the second semester of 2017, FT SISTEMAS plans to set up two customer service facilities to assist farmers, one in São Paulo and the other in Mato Grosso do Sul. In 2018, the company plans to expand its agribusiness operations to other regions in the country.

The Market
According to the latest market research conducted in 2016 by CPL Business Consultants, a UK-based company specialized in the agricultural sector, from 2011 to 2014 the world market for organic pesticides (biological control agents) recorded growth rates five times higher than the chemical pesticides industry. The average annual worldwide growth is now around 10%, and it should reach US$3 billion this year, accounting for 5% of the total market.

In Brazil, this market trend is not different. Sales of this sector are expected to grow from 15% to 20% in the coming years. According to the Brazilian organization CCAS (CCAS (Scientific Council for Sustainable Agriculture), in 2016, 277 new pesticides (plant protection) products were registered, reaching a new record. Of this total, 38 are biological and/or organic pesticides, representing a 65% increase in relation to the previous year.

AboutFT SISTEMAS
Founded in 2005, FT SISTEMAS develops light tactical UAVs, among which the aircraft model FT-100,  recently used for military operations in the 2016 Olympics in Rio de Janeiro, and the new FT-200 FH, an unmanned helicopter that can reach over 100 kilometers with autonomy of over 10 hours of flight carrying up to 50kg of payload. Based in the technology hub of São José dos Campos (São Paulo), the company invests in UAV-based integrated intelligence systems. The company serves the Defense, Security, Infrastructure, Agribusiness and Environmental markets. In 2013, FT SISTEMAS was granted the status of a Strategic Defense Company (EED) by Brazil’s Ministry of Defense and, in 2015, it received investments from the Aerospace Investment Fund.