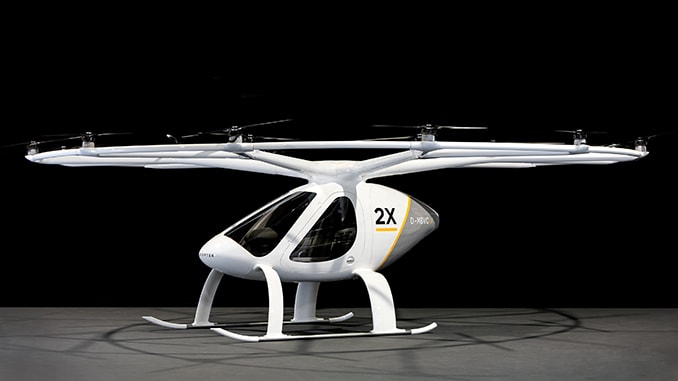 The German start-up e-volo is celebrating the world premiere of the first series model of a passenger multicopter on April 5 – 8, 2017 at Europe’s largest general aviation trade fair AERO in Friedrichshafen. After six years of development e-volo is presenting the Volocopter 2X, a vertical take-off and landing (VTOL) aircraft powered purely by electricity and capable of carrying 2 passengers.

In addition to the failure tolerance due to the Volocopter’s redundancy concept and its ability to fly emission-free, the low-noise operation marks another important advantage over other VTOL aircraft.

The 2X is the consequent evolution of the VC200 prototype towards everyday use. Its battery replacement system allows for a quick swap and makes it ready for operation within a few minutes. The 2X also leaves a very attractive optic impression. The sporty design includes a delicate rotor plane and a cockpit that comfortably seats 2 adults. Glazed doors and upholstered leather seats are some of the optional extras that will also be offered.

The Volocopter 2X has been developed for approval as an ultralight aircraft and should receive “Multicopter” type certification that shall be created under the new German UL category in 2018. Anyone with a Sport Pilot License (SPL) for multicopter will be able to fly the Volocopter 2X, which is quite simple and extremely safe thanks to its automatic height and position control.

With granting of the type certificate, series production of the 2X is set to start for the German air sports market. Until then, several pre-series models shall be used for test flights and demonstrations.

The Volocopter 2X has not only been designed as a sport aircraft but also as a demonstrator for future urban mobility systems. By 2018, the first Volocopter 2X models with a special permit are set to be used as flying taxis in pilot projects. The technology also allows for remote controlled and even autonomous flights. For the first flying taxi pilot projects, e-volo assumes the Volocopter 2X will still be pilot-controlled due to the currently applicable regulations. Initially, remote-controlled or autonomous taxi flights can be carried out unmanned as necessary.

For the future, e-volo is striving to obtain a commercial registration for the Volocopter, which allows for transportation of passengers as commercial taxi flights. The development of a 4-seater Volocopter with international approval (EASA/FAA) is one of the next planned steps in the development of e-volo.