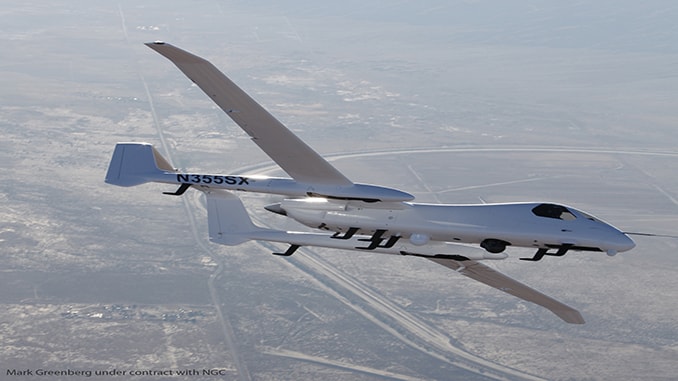 Northrop Grumman’s Firebird optionally manned demonstrator has completed an early shakedown of the anti-collision system intended to make the skies safe for unmanned and manned aircraft.

The flight tests over Mojave, California, will provide the data that shows how well the version of the Airborne Collision Avoidance Warning Systems (ACAS) designed for unmanned air vehicles (UAVs) conforms to simulation models. Any discrepancies will be used to refine the models, which shoulder the load of the development activity for the new system.

ACAS is being developed by a mixture of government agencies, national laboratories, and private contractors.

The US Federal Aviation Administration is spearheading the development of ACAS, which is intended to replace the Traffic Alert and Collision Avoidance Warning System (TCAS) for all aircraft, whether manned or unmanned.

Working for the FAA, the Massachusetts Institute of Technology’s Lincoln Laboratory and the Johns Hopkins Applied Physics Laboratory developed the software for ACAS Xu, the version dedicated for UAVs.

The laboratories delivered that software to ACSS, which integrated the code into its T3CAS hardware, which includes functions for traffic and collision avoidance, terrain awareness and warning and a transponder.

ACSS and Northrop supplied additional aircraft for the demonstration, which flew a series of collision trajectories with the Firebird. The ACAS Xu system on the Firebird is supposed to detect the impending collision using an onboard sense-and-avoid sensor package, then perform a series of steps. It first sends “resolution advisories” to the host aircraft and the “intruders”, then coordinates maneuvers with the TCAS on board the other aircraft.

Ideally, ACAS Xu will make the UAV safer to operate in national airspace than if a pilot was in the cockpit, Boerwinkle says.

In addition to ACAS Xu, the project is also developing ACAS Xa and Xo for manned aircraft equipped with TCAS already.