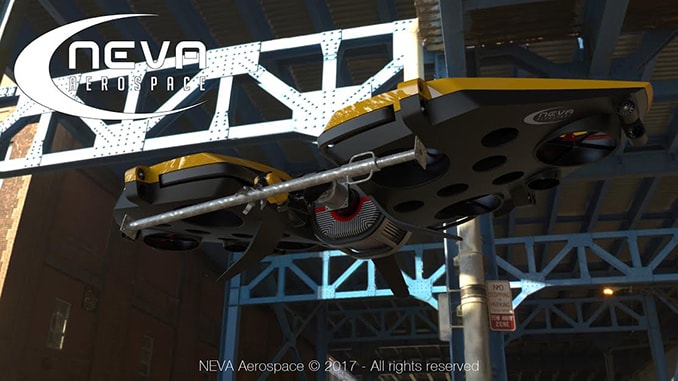 Heavy duty aerial robots have made a major leap from wish-tech to becoming next generation real tech innovation after the success of early aeronautical engineering development work by Neva Aerospace. Having secured essential international patent protection of its concepts, the company is now sharing its ideas for aerial robotic platforms (ARPs) with the public announcement of its Vlinder concept. ARPs will meet demand from industrial operators who need to find ways to complement human workforces for maintenance and engineering work in dull, dirty, distant and dangerous locations.

While current generation camera and survey drones weigh just a few Kg and have very limited flight endurance, the Neva project is looking towards heavy duty drones, with the flight endurance to work beyond line of sight controlled by flight management systems, and the stability to act as steady platform for onboard robots carrying out precision work. Payloads of up to 2 tons are envisaged.

Neva’s inherently safe and sustainable and scalable technology for ARPs is based on the use of distributed thrust from multiple hybrid ducted electric turbofans(ETF). Using many ETF of different sizes and with precise orientation aids precision control and allows for redundancy.

The Neva turbines that are now being used by  the Neva team for its own test prototypes and that will be built into future  Vlinder ARPs are based on the company’s own highly-efficient and powerful patented static thrust designs. Neva announced the world’s first electric static thrust turbofans (ETF) optimized for VTOL and stable hovering at the end of 2016. It is now making this breakthrough available to the OEM market where Neva believes its turbines will eventually and inevitably displace unsafe and uncaged propellers if the commercial UAS market is to win acceptance in urban areas and civil airspace.

“The Neva project started in 2009 and we understand that there are no short cuts or quick fixes. We are not in the PR business of announcing systems that are neither technically nor economically viable.

“We are on a long journey and one which we cannot navigate alone – we work in partnership with other technology providers and with the organizations that will use this technology to customize designs that can be fully integrated into their enterprise.

“We have of course been talking to such firms over the years, but it is only now we have come to the end of a long process of securing patent protection that we can share our ideas more publicly. This enables us to demonstrate the logic and soundness of the Neva vision for heavy duty workhorse drones.”

Vlinder ARPs will always be custom designed. They will be designed to be integrated within human teams, existing fleets of machines and users’ data management workflow.

The design is intrinsically safe, with no uncaged propeller blades, and will achieve stable flight with multi-directional turbines from 20kg to 2 tons. Payload can be anything from a camera to a robotic tool. The Vlinder concept is also suitable for heavy lifting as an easily-deployed aerial crane.  They  will be both versatile and able to work virtually non-stop to deliver RoI. That puts Neva’s estimated costs of between €100,000 to €1,000,000 (depending on size, tasks and payload) into perspective. Minimum order: 5 units.

NEVA AEROSPACE is a European consortium based in the United Kingdom. We partner with key clients, technology suppliers, and financial institutions to develop technologies for unmanned air vehicles (UAVs), unmanned air cargo(UAC), aerial robotic platforms (ARP), and electric aviation. Neva has a portfolio of patents and technologies which are among the most advanced worldwide. As of January 2016, the Neva Consortium included 5 companies; and more than 100 people are actively working on our projects.

Neva Aerospace offers turnkey solutions based on autonomous, low-emission aerial robots capable of carrying 2kg to 2 tonne payloads. Under development since 2009, our electrical aviation systems are designed to perform precise tasks and services. Capable of both vertical take-off and landing (VTOL) as well as horizontal flight, they have the accuracy needed to operate in congested urban environments. Their remarkable stability in flight will ensure that they are also reliable over long distances and as platforms for delicate service and maintenance work.

Neva is developing through the partnership with key clients (oil & gas, construction, agribusiness, transportation, industry automation) and technology suppliers (avionics and air system controls, turbines, composites, robotics, etc), together with financial investors. This consortium development approach adds strength and ensures balance in the Neva business model. It provides access to our markets and to the key technologies needed to introduce heavy drones into civilian regulated airspace and industrial businesses. It also provides synergies between investors, early adopters in our target markets and providers of key technologies.