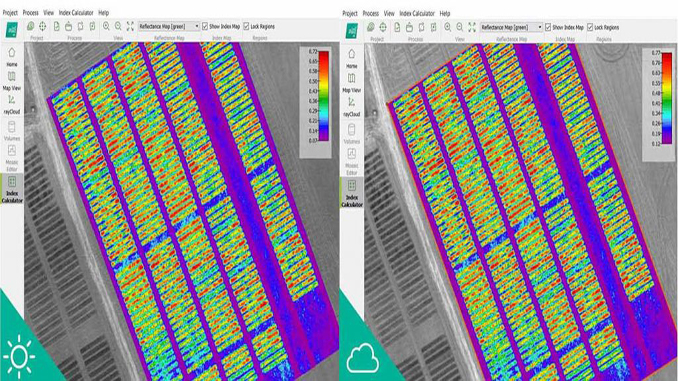 When you are a service provider with high client expectations, you need to be able to obtain quality results on a regular basis. When it comes to agriculture, producing consistent index maps is critical, regardless of weather conditions. If you try to investigate whether the pesticide treatment is working or not, you need to be sure the two maps you are comparing show the difference on the plant’s health, not the weather conditions.

This is the plight of Spanish solution company Technidrone, which assembles highly specialized drone systems in addition to providing mapping services in agriculture, thermography, surveying, and more. When the Parrot Sequoia multispectral camera was released, they were among the first to use it, pushing the product limits and even designing and freely sharing the sketches of a 3D printable mount we could now say is the standard for Sequoia/drone integration.

In this example, Technidrone was hired by a highly reputable company to fly over several experimental plots in Northern Spain, the famous Pamplona of Navarra. The plots were experimental, but the data was not: Technidrone captured multispectral imagery of the plots over time for monitoring the different plant varieties, fertilizer application techniques and quantities, etc.

For this work, Sequoia was mounted on the Aeris Pro drone. This drone, designed and manufactured by Technidrone, weighs 5 kg and can carry up to 1kg in sensors. Flight time is good, at 30 minutes. 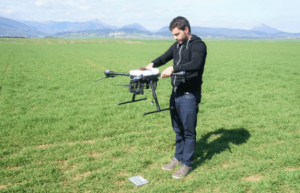 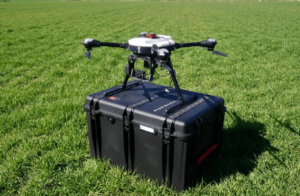 The Aeris Pro flew two days in a row with Sequoia. As the goal was to use the data to monitor plots over time, flights were planned identically. The weather, however, was different both days. The first day was a clear sky and the second day was overcast.

In order to have the dataset georeferenced and get survey grade accuracy, Technidrone added 7 ground control points (GCPs) into Pix4Dag at no charge.

Before flying, Technidrone’s team used a reflectance calibration target. Acquiring images to calibrate the target helps during processing, with the goal of absolute reflectance values.

They were careful NOT to cast any shadow over the target when taking pictures, which would bias results for the whole project!

“This was a no-brainer, because currently Pix4D is the only processing software out there that allows us to leverage the sunshine sensor,”

As you know, Sequoia has a sunshine sensor, which collects irradiance data and corrects for illumination differences while flying. In other words, it allows you to fly in almost any weather condition*, sunny or not, and get comparable results.

Below you can see the end results. The map on the left was produced from data taken on a sunny day, and the map on the right from an overcast day. Results are nearly identical and it’s actually quite hard for the human eye to detect differences.

FYI: the whole process, from importing the images to the results took 20’. This makes a 2’ per ha.

Below Tecnidrone shared a small statistical analysis on how similar the results from both weather conditions were.

The table shows the average difference and standard deviation for the reflectance maps in both scenarios.

For Technidrone, the results were a big deal. As a service provider that works high-level, high-expectation jobs, being able to obtain the same Index maps regardless of weather conditions thanks to Pix4Dag is critical. Results should be solid, without needing to depend on never-ending sunny days.

Be ready for the season. Get a free trial of Pix4Dag

No Replies to "Comparable Maps, Anytime, Thanks To Pix4D And Sequoia Sunshine Sensor"