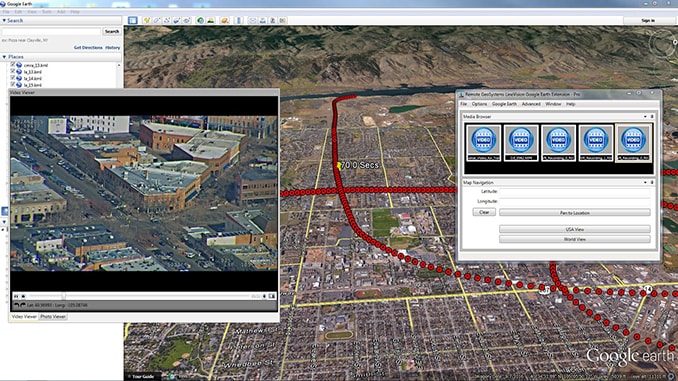 Unlike its stand-alone predecessor, the new LineVision Google Earth is a true application extension and gives users the full functionality of native Google Earth, including Pro edition. Now anyone with a GPS-enabled video camera, drone or geospatial DVR that can geotag video in the proper format can immediately load their videos and photos to Google Earth along with compatible KML and other traditional geospatial data.

As the video plays, a position marker moves along an aerial or terrestrial GPS track positioned three-dimensionally in Google Earth, continuously indicating where the current frames were recorded. Users may also geospatially “navigate” a video recording by simply clicking a single point along an aerial or terrestrial GPS track. The video then automatically advances to that point in the recording so that users can visually interpret what was recorded at that specific place and time. If something of interest is detected in the video, users may also “snap” a still image from the video, which is geotagged and saved for future analysis.

This easy-to-use software is one of the most “open” and versatile geotagged video analysis tools available. The LineVision Google Earth Extension is compatible with properly formatted georeferenced video files from a variety of consumer hand-held and action video cameras, drones and specialized mobile geospatial DVRs, including our own geoDVR™ geospatial FMV recorder.

The LineVision Google Earth Extension is much more than a multi-channel geospatial video tool. In addition to video, users can import oblique photos and KML data from survey and inspection projects. All these imported data types can be saved in a Remote GeoSystems geoProject file for data portability, reporting and future analysis in other versions of LineVision desktop, cloud and server applications.