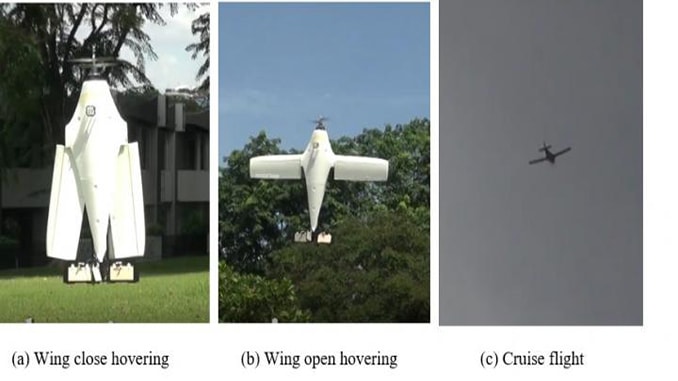 A hybrid UAS That May Change The Way People Operate Drones

Two PhD students in National University of Singapore, Unmanned System Research Group spent four years in developing the novel hybrid unmanned aerial vehicles(UAV), U-Lion as shown in Figure 1. U-Lion is a hybrid UAV which can take-off and land vertically like helicopter UAVs, and transit to cruise flight like normal airplanes.

The wings can be fully retracted or expended, to favor the stability in VTOL mode or provide efficient lift in cruise flight. U-Lion is also able to fly autonomously includes vertical take-off and landing, cruise flight and autonomous transitions. The developed technology brings the application of hybrid UAVs one step closer.

Their research result has been published in Science China Information Sciences, Volume 60, Issue 3, 2017. The research work is mainly done by Wang Kangli, Ke Yijie under the supervision of Professor Chen.

Over the last decades, hybrid UAV has attracted worldwide interest for their potential applications in military and civilian operations, especially where there are severe constraints in their operating environment, for example, sea surveillance or forest mapping. The VTOL capability minimizes the dependency of the take-off and landing facilities and cruise flying capability allows hybrid UAVs to perform long range and duration tasks. The hybrid UAV is a hot research topic not only academically, but also commercially. Many companies have devoted resources in developing hybrid UAVs, such as Google Project Wing.

However, due to the great difference in the structure for VTOL UAVs and fixed-wing UAVs, it is a huge challenge to combine the two functionalities into one single UAV. Previous attempts of hybrid UAVs tend to focus on either one of the flying modes, but not optimal on both. Besides, due to the high uncertain aerodynamic forces in the transition process, the transition process is difficult to automate.

To achieve optimal performance in both flying modes, U-Lion is designed in tail-sitter configurations with reconfigurable wings and vectoring thrust. U-Lion could adopt different flying modes based on the mission requirements, and adjust the wings to achieve optimal performance. The ability allows U-Lion to fly much longer than typical VTOL UAVs and possess greater maneuverability compared to normal fixed wing UAVs. Advanced modelling and control algorithm is also developed for overcoming the uncertainties in transition and achieve autonomous full envelope flight.

“Being optimal in both flying modes, U-Lion may bring a new way people operates drones. The fast reaction and static hovering capabilities bring U-Lion great potential in many applications, the VTOL capability allows it to operate in almost anywhere, including on vehicles on the sea.” Said Ke Yijie, “In five to ten years’ time, hybrid UAV will change the way people operate in areas like forest mapping, sea surveillance, power line inspection and disaster reaction. Being one of the best hybrid UAV, U-Lion will certainly lead the trend for future applications!”