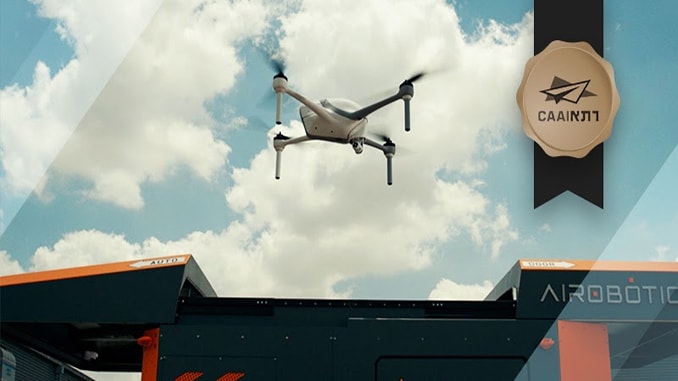 Airobotics is officially the first certified company in the world to perform fully automated drone flights without a human pilot, following a new certification by the Israeli Civil Aviation Authority

Airobotics is announcing that it is the first company worldwide granted with the authorization to fly fully automated drones without a pilot. The certification, that was presented by the Civil Aviation Authority of Israel (CAAI), is solidifying Airobotics’ status as a world-leader in the field of automated drones, allowing for the most innovative Beyond Visual Line of Sight (BVLOS) commercial drone operations.

This milestone proves that decisions and actions that were once taken by a human drone pilot, can now be taken by Airobotics’ computer software and artificial intelligence. Essentially, an authorized pilot is now replaced by an authorized computer.

This concept, of a system operating on its own, was designed and developed for the first time by Airobotics, solving some of the biggest problems for the drone market, such as high costs of labor, increased logistics around drone operations, expensive and lengthy training of aircrew as well as enabling customers that are not drone experts to perform highly complex drone missions.

For the past 24 months, Airobotics went through rigorous field testing and product verification process, inspected by CAAI, in order to prove the system’s safety case. After accumulating over 10,000 flight hours and automated flight cycles, producing dozens of technical manuals, engineering books, reports and analysis, Airobotics had passed all necessary tests and received the certification enabling the system to operate without a pilot as a safe, reliable drone solution.

The certification process started with an Alpha version in March 2015, progressed to a Beta version on August 2015, through to MVP (Minimum Viable Product) last year. The process demonstrated the system’s abilities, which were corrected along the way based on CAAI’s and Airobotics’ customers’ demands. These demands included adhering to safety standards, security procedures, emergency response, system reliability, and the capability to comply with flight and mission demands per Airobotics’ concept of operation. Examples of tests include environmental conditions, endurance, and robustness testing. Throughout the process, Airobotics proved time and again to be at the highest level of field experience, while simultaneously adhering to regulation requirements.

The innovative certification process led by CAAI was based on the latest existing international standards for UAVs. This modern certification approach takes into consideration specific risk analysis and safety cases. Airobotics, together with the CAAI, is setting a new benchmark for the evaluations and approval of UAV operations for the rest of the world.

Based on the experience Airobotics has gained in Israel, the company is scaling its operations to additional markets, starting with Australia and USA.

Airobotics recently announced its first customer in Australia, the mining company South32. Airobotics is granted with a commercial license from CASA (Civil Aviation Safety Authority) in Australia and with an FAA waiver authorisation under Part 107 in the US.

“Here in Israel, we are always pushing the boundaries of innovation,” said Ran Krauss, CEO & Co-Founder of Airobotics. “We are proud to be at the forefront of the commercial UAV area, together with CAAI, and be able to lead the way for drone companies and regulators throughout the world.”

“Airobotics has completed a long cycle, which started in 2013. This newly granted certification is our next generation milestone, that completely takes the human drone pilot out of the equation in BVLOS operations. We predict this certification milestone will revolutionize the global market landscape, and pave the way for future applications of automated drones.”

As a completely automatic unmanned aerial system, the first of its kind in the global market, Airobotics enables industrial companies to leverage the power of drones without the need for a human operator. Airobotics’ platform provides customers with the ability to run missions automatically, allowing them to monitor, inspect, survey, and secure large industrial facilities and other strategic sites.

The Airobotics’ automatic platform is comprised of three parts: “Optimus”, a large, high capacity drone capable of flying 30-minute missions while carrying a one-kilogram mission specific payload; an “Airbase”, a completely automated base station from which the Optimus drone launches and lands on its own, without any human intervention; and “Airobotics Software”, an integrated, dynamic software that enables users to control and manage missions with one click.

In summary, taking the human drone operator out of the equation marks an achievement, leading the way to the true fulfillment of robotics vision.