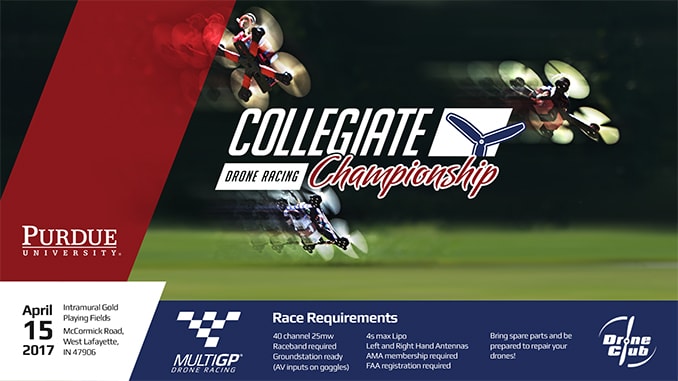 Purdue University and MultiGP have partnered together to produce the first ever National Collegiate Drone Racing Championship on April 15, 2017.  Showcasing over twenty universities and over forty students, this historic event will be fully sanctioned by MultiGP, the Academy of Model Aeronautics and live streamed by FPVLive.tv.  This commemorative event will lay the foundation for a National Collegiate Series, which will open participation to universities and students across the country to connect, fly and compete in 2018.  Hosted by one of the nation’s largest collegiate drone racing clubs at Purdue University, this adrenaline pumping sport not only spurs interest in technology education, but connects students in a constructive environment.

MultiGP Drone Racing is known throughout the world for providing professional and competitive racing events, with over 15,000 registered pilots and 1,000 volunteer run race chapters. When Purdue University was interested in creating a competitive collegiate drone racing program, it was only logical that MultiGP provide these schools with the tools they need to succeed. Over the last two years, MultiGP has established itself as the gold standard of drone sports, and they will bring that same success to the National Collegiate Drone Racing Championship.

For several major professional sports, participation at the collegiate level is a valuable stepping stone for competitors looking to hone their skills to enter the professional arena. Bringing drone sports to the collegiate level enables our younger generation the ability to engage in competition that challenges them on several level, including academic. Drones are robots, and it has often been said that they are a complete STEM package, encompassing all aspects of science, technology, engineering, and mathematics. The Collegiate National Drone Racing Championship will be an excellent opportunity for our college students to challenge not only each other, but themselves.

For more information, go to www.MultiGP.com