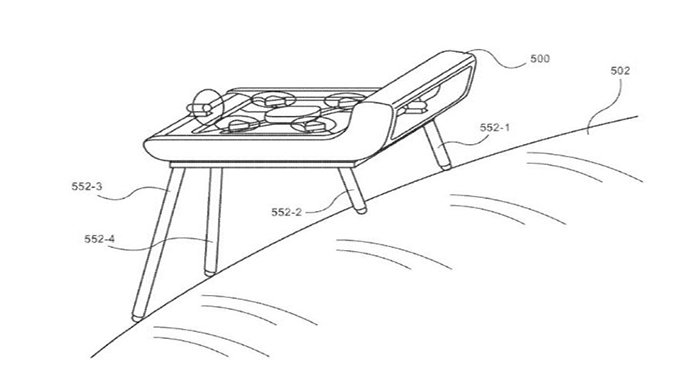 Amazon’s inventors are taking a page from Inspector Gadget’s playbook to design drones with adjustable landing legs and reconfigurable propellers.

Those two design tricks are the focus of patents issued today. It’s hard to say whether they’ll become features on Amazon’s delivery drones, still in development. But surely there’s a chance someone will make use of the innovations, right?

The idea for the landing gear, credited to Nicholas Kristofer Gentry, adapts the sort of telescoping feature long used for camera tripods: When a drone lands on a sloping surface, its legs can expand or contract to keep the drone’s frame (and, not incidentally, its payload) level.

“The landing gear assembly may also operate as a landing dampener to absorb shock resulting from a landing of the UAV [unmanned aerial vehicle] to absorb safe delivery of fragile items,” the patent says.

The patent even covers ideas such as building spikes, screws, suction cups or magnets into the landing legs. Such features could help the drone stay put while it’s sitting on icy, slippery or metallic surfaces.

The other patent published today focuses on the tips of a drone’s propellers. The originators of this idea, Brian Beckman and Allan Ko, suggest building in a mechanism that can change the slant of the propeller tips, effectively creating “winglets” like the upturned tips on a Boeing 737’s wings.

Winglets can increase flight efficiency by minimizing the spinning vortices of air that are created as a flat surface slices through the air. However, there are some situations where winglets reduce flight stability – for example, if there’s a strong crosswind during takeoff or landing.

The patent lays out a scheme in which the drone can adjust the angle of its propeller tips to strike the right balance for its flying conditions. And that’s not all.

“Those of ordinary skill in the pertinent arts will recognize that the systems and methods of the present disclosure may be utilized to realign or readjust any attribute of a reconfigurable propeller, including not only cant angles of blade tips with respect to blade roots, but also blade pitches, blade lengths, blade rake angles, or any other attribute of the propeller,” the inventors say.

The applications for both patents were filed back in 2015. Amazon traditionally doesn’t comment on its patent filings, and there’s no evidence that the features have been built into the prototypes that the company is currently testing (or putting on display at this week’s SXSW conference in Texas).

Nevertheless, the concepts sound a lot less far out than some of the other ideas that Amazon has patented, such as flying warehouses and parachute package drops.