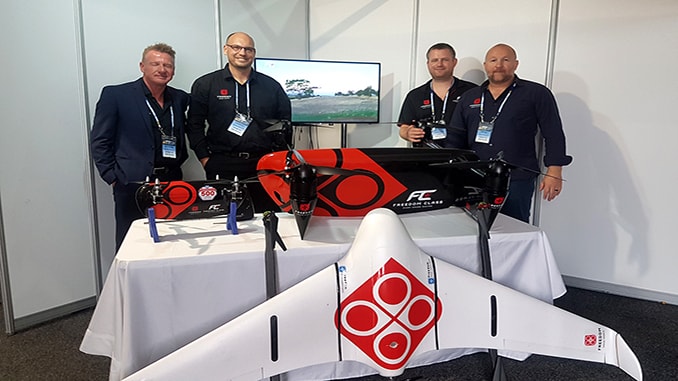 On the first weekend in March, The Freedom Drone Sports team were excited to showcase the latest developments at the Avalon International Airshow just outside Melbourne, Australia.

For the first time in Airshow history, there was a dedicated Drone Showcase area that saw over 20 companies displaying the latest in drone technology.

Conveniently located at the entrance of the showcase, The three drones on display ensured that we were hard to miss.

A particular highlight for the team was the unveiling of our Freedom 500 Series racing drone. This was the first time the public has seen the 500 Series, which is specifically design to provide a crucial step between current racing drones and Freedom Class Giant Racing Drones.

Designed with the same ‘H’ configuration as the Freedom Class machines, the 500 Series is smaller in stature, but definitely not short on performance. Pilots will be able to move from current racing drones, into the 500 Series, and onto Freedom Class, much in the same way race car drivers go from Karting through to GP2 and onto F1.

Also on display was the Freedom Drone Sports Agricultural VTOL drone, the Skywalker X8. Wayne Lording, CEO from our sister company Freedom Drone Consultants, along with our CTO Leonard Hall, gave a number of great presentations on the use of drones in agriculture and in particular the application and performance of the X8.

However, the main attraction of the weekend was definitely the V2.0 Freedom Class Racer model. It’s sheer size meant that it was unmissable as people entered the Drone Showcase, and we regularly had crowds 3 or 4 deep trying to get a glimpse and a photo or two.

Looking striking in the red and black livery, the Racing Drone was a constant talking point of the Airshow, gaining the attention of the wider aviation industry and mainstream media including SBS World News.

Newly appointed Communications Director, Chris Ballard, kept the crowd informed all weekend, constantly chatting to enquiring public one on one and also providing insightful group presentations when the crowds were large enough. The rest of the team were constantly busy throughout the weekend, answering as many questions as possible.

By the end of the weekend, the team was tired but extremely happy with the amount positive comments and attention that had been received. A big thank you to everyone who stopped by and we will have some more updates to share with you all soon.

No Replies to "Freedom Class Racer V2.0 Model On Display At The Avalon International Airshow"